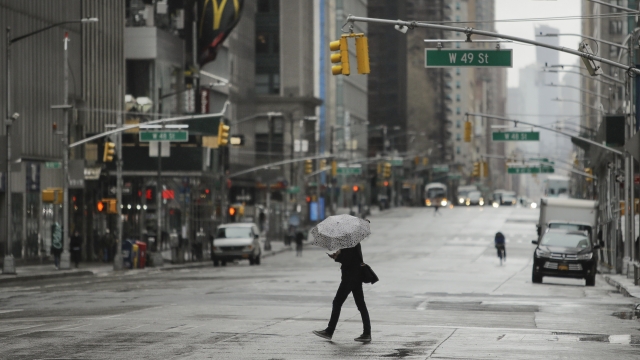 SMS
Trump Says Coronavirus Outbreak May Be Nearing Peak In Some Areas
By Katherine Biek
By Katherine Biek
April 6, 2020
Health experts warn the U.S. is entering what could be a very difficult week in its fight against coronavirus.
SHOW TRANSCRIPT

"We are starting to see light at the end of the tunnel."

President Donald Trump told reporters Sunday that the coronavirus outbreak in the U.S. appeared to be nearing its peak in some areas.

Like the state of New York — where Gov. Andrew Cuomo said the number of deaths and hospitalizations from COVID-19 dropped "for the first time" in days.

To provide more assistance, President Trump is deploying more than 1,000 military medical personnel to New York City  — which is the epicenter of the outbreak in the U.S.

Despite this glimmer of hope in New York, health experts warn the U.S. is entering what could be a very difficult week in its fight against coronavirus.

Right now we're seeing, as we all said correctly, that this is probably going to be a really bad week. That is a reflection of what happened two and a half weeks ago. So if we start seeing now a flattening or a stabilization of cases, what you're hearing about potential light at the end of the tunnel doesn't take away from the fact that tomorrow the next day is going to look really bad." Dr. Anthony Fauci said.

The U.S. Surgeon General issued a similar warning on Fox News, saying, “This is going to be our Pearl Harbor moment, our 9/11 moment. Only, it’s not going to be localized, it’s going to be happening all over the country. And I want America to understand that."

Because of this, officials say Americans should continue to practice social distancing. The CDC is also now recommending people wear non-medical cloth face coverings while out in public.