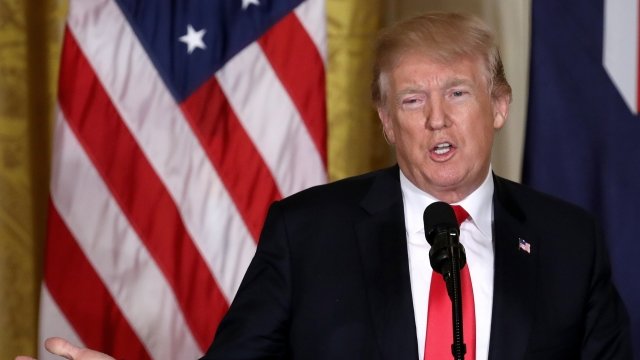 President Donald Trump tweeted Sunday that there will be no Deferred Action for Childhood Arrivals deal.

Instead, he suggested Senate Republicans use the nuclear option — ruling on a simple majority vote — to move forward on immigration reform.

His tweet said, in part: "Republicans must go to Nuclear Option to pass tough laws NOW. NO MORE DACA DEAL!"

Border Patrol Agents are not allowed to properly do their job at the Border because of ridiculous liberal (Democrat) laws like Catch & Release. Getting more dangerous. “Caravans” coming. Republicans must go to Nuclear Option to pass tough laws NOW. NO MORE DACA DEAL!

Trump also discussed the North American Free Trade Agreement in his early morning tweets. He said he would dismantle NAFTA if Mexico doesn't slow the flow of immigrants coming across its own southern border.

Mexico is doing very little, if not NOTHING, at stopping people from flowing into Mexico through their Southern Border, and then into the U.S. They laugh at our dumb immigration laws. They must stop the big drug and people flows, or I will stop their cash cow, NAFTA. NEED WALL!

Trump seems to like the nuclear option — he's called on Senate Republicans to use it several times in the past.

Right now, the Senate requires 60 votes to end debates and vote on legislation.