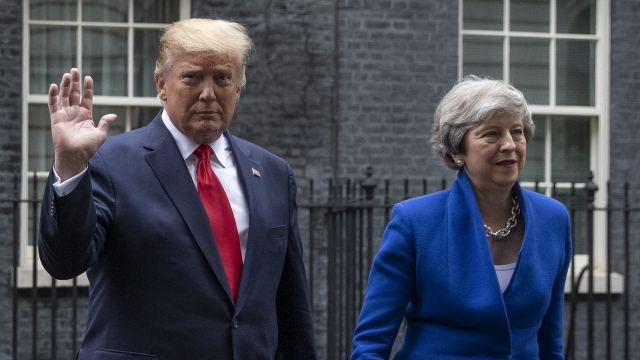 SMS
Trump Brings Health Care Into US-UK Trade Talks
By Matt Picht
By Matt Picht
June 4, 2019
President Trump says the U.K.'s National Health Service should be "on the table" in post-Brexit trade talks between the U.S. and the U.K.
SHOW TRANSCRIPT

President Trump is eager to sign a trade deal with the U.K. if and when it actually leaves the E.U. But some of his comments are fueling fears about what a trade deal could mean for the country's health care service.

The NHS, or National Health Service, is the U.K.'s government-run health care system, and it's part of the reason the U.K. spends so much less on health care than the U.S. While both governments spend about the same percentage of their GDP on health care, Americans spend exponentially more on private systems than U.K. citizens do.

Proponents of the NHS worry that U.S. might push for trade provisions that would undermine the U.K.'s health care system. The White House has talked about forcing the U.K. to pay more for U.S.-made pharmaceuticals: right now, the NHS is able to negotiate much lower prices from pharma companies than its fragmented U.S. counterparts.

That move's not likely to be well received in the U.K.; a YouGov poll last year found an overwhelming amount of British citizens like the country's health care system. Several of the candidates running to be the country's next Prime Minister have promised to defend the NHS in any trade talks with the U.S.

But detractors of the U.K.'s socialized medicine system argue introducing more privatized competition to the country will cut down on long wait times and underfunded services. President Trump tweeted last year that the NHS was "going broke and not working," in order to argue against a similar government-run health care in the U.S.

Health care is just one of a number of dicey issues that could get in the way of a U.S.-U.K. trade deal. The two countries will also have to square their different approaches to food safety standards — the U.S. wants the U.K. to relax strict E.U. standards to allow products like chlorine-washed chickens onto the U.K. market.