Trump Says His Lawyer Was Reimbursed For Payment To Stormy Daniels 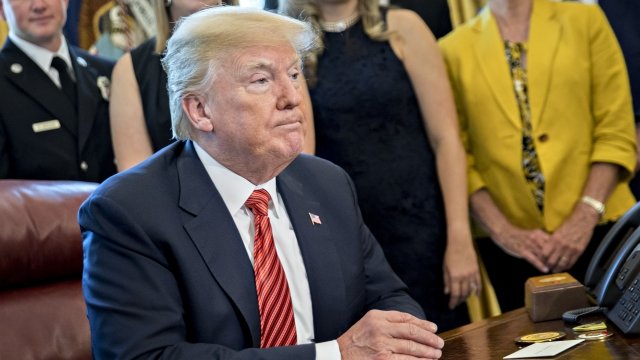 SMS
Trump Says His Lawyer Was Reimbursed For Payment To Stormy Daniels
By Katherine Biek
By Katherine Biek
May 3, 2018
In a series of tweets Thursday, the president said no campaign money was involved in the reimbursement.
SHOW TRANSCRIPT

President Donald Trump confirmed Thursday that his personal attorney was reimbursed for a $130,000 payment made to adult film star Stephanie Clifford, aka Stormy Daniels.

That attorney, Michael Cohen, made the payment in 2016 in an effort to keep Clifford quiet about an affair she alleges she had with Trump more than a decade ago.

In a series of tweets Thursday, Trump said Cohen was reimbursed through a monthly retainer. He stressed that no campaign money was used to pay Cohen back.

Trump's confirmation came one day after another one of his lawyers, Rudy Giuliani, spoke about the reimbursement on Fox News.

Clifford filed a defamation lawsuit against Trump on Monday, claiming he made a false statement to "denigrate and attack" her. She's also suing the president to get out of her nondisclosure agreement.