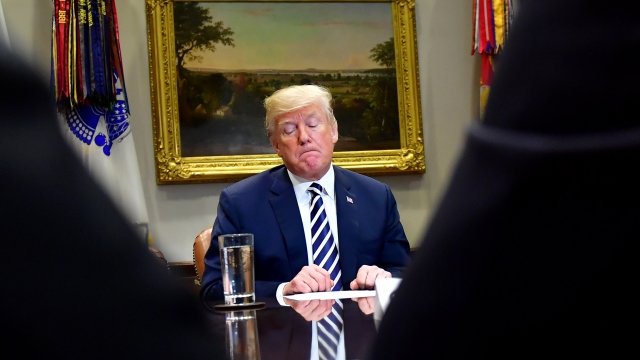 At a private fundraising event earlier this month, President Donald Trump was talking about trade when he brought up standards for cars in Japan. This is what he said:

"It's called the bowling ball test. ... They take a bowling ball from 20 feet up in the air and they drop it on the hood of the car. ... And if the hood dents, then the car doesn't qualify." At the White House press briefing the next day ... it came up.

"I worked in Japan for about 20 years. I covered the automotive industry. I don't recall anything like this; no one we've spoken with in the industry recalls it. Did you speak with the president about this and where did he get this from?" a reporter asked White House press secretary Sarah Sanders.

"Look, the president's been talking about unfair trade practices for decades, it's not new for him," Sanders responded. "Obviously he's joking about this particular test, but it illustrates the creative ways some countries are able to keep American goods out of their markets."

Does it? It turns out there is a test in Japan where a hemisphere-shaped object is fired at the front end of a car to test how much force someone's head would have to absorb if the car hit them, but that test is about the human head, not about the car. In fact, in that test, the more give the car has, the better it is for the skull.

So, in this case, the president's talk of this "bowling ball test" is just false.