Trump Says Japan And US Are 'Getting Close' To Trade Deal 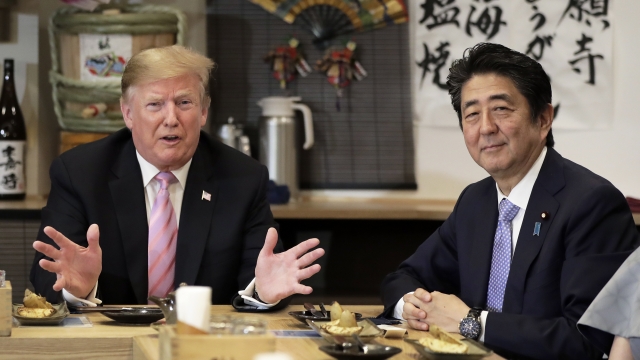 SMS
Trump Says Japan And US Are 'Getting Close' To Trade Deal
By LeeAnne Lowry
By LeeAnne Lowry
May 26, 2019
President Trump and Abe will meet Monday to address the U.S.'s $67.6 billion trade deficit with Japan.
SHOW TRANSCRIPT

President Donald Trump had the first full day of his visit to Japan on Sunday. He's the first foreign leader to visit since the country inaugurated a new emperor at the end of April.

President Trump said at a dinner with Japanese Prime Minister Abe Shinzō, "The Prime Minister and I talked a lot today about trade and military and various other things. I think we had a very productive day."

President Trump says Japan and the U.S. are "getting close" to a deal that would address the U.S.'s trade deficit with Japan. According to U.S. figures from last year, there's a $67.6 billion trade imbalance in Japan's favor.

The commander-in-chief told Japanese business leaders, "I would say that Japan has had a substantial edge for many, many years. But that's okay. Maybe that's why you like us so much. But we'll get it a little bit more fair, I think. I think we'll do that."

But Japan's economy minister said he doesn't expect a deal to be made during this trip. Abe and President Trump will hold a summit on Monday to negotiate trade.