Trump Says His Base Is 'Stronger Than Ever.' Recent Polling Doesn't. 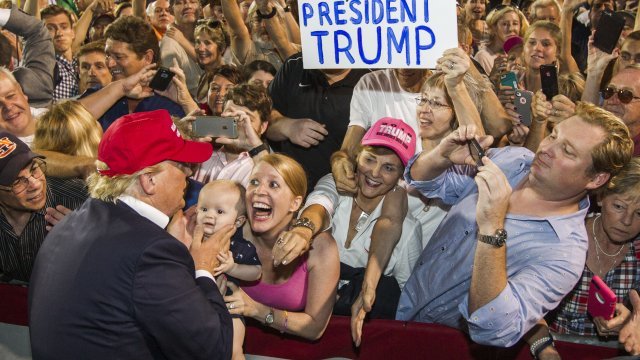 SMS
Trump Says His Base Is 'Stronger Than Ever.' Recent Polling Doesn't.

By Gabrielle Ware
August 7, 2017
On Monday, President Donald Trump said the support from his base is growing stronger despite polling that shows otherwise.
SHOW TRANSCRIPT

President Donald Trump says support from his base is "stronger than ever." That might not be the case.

In one of two tweets early Monday morning, Trump said, "Hard to believe that with 24/7 #Fake News on CNN, ABC, NBC, CBS, NYTimes and WAPO, the Trump base is getting stronger!"

But according to a poll this month by Quinnipiac University, Trump's approval rating has dropped to a new record low, even among his core demographic: white noncollege educated voters.

Fifty percent of respondents from that group say they disapprove of the job Trump is doing. His approval rating with white men overall dropped slightly from 52 percent to 47 percent.

Now, this is just one poll, but the change is still significant. It shows almost a 10 percent drop-off in approval since June. And while it's not clear what led to the drop, it does follow a string of negative press for the administration.

Trump's promise to repeal and replace Obamacare has stalled in Congress multiple times. The investigation into possible campaign collusion with Russia is ongoing. And the White House has had somewhat of a revolving door for officials lately.

And despite speculation that it was intended to rally his base, Trump's announcement via Twitter that transgender people would not be allowed to serve openly in the military, faced backlash from military members, GOP voters and members of Congress.

Still, Trump is making a concerted effort to reinvigorate his base. He's hosted several visits in states that voted for him during his campaign.

The latest of those rallies was in West Virginia, where Trump had a higher overall approval rating during the first six months of 2017 than any other state.

And while the Quinnipiac poll shows Trump's base likely isn't getting stronger, support for Trump among Republicans overall is still high at 76 percent.