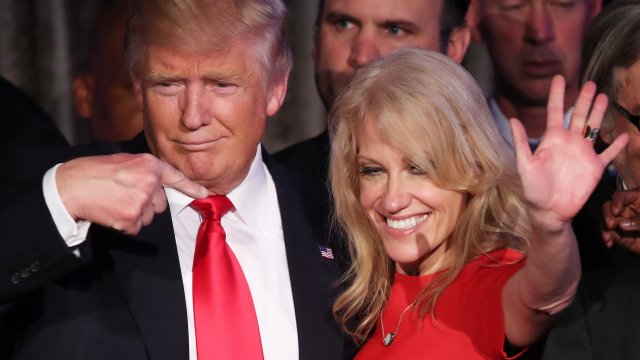 SMS
Trump Says He Won't Fire Kellyanne Conway After Watchdog Report
By Briana Koeneman
By Briana Koeneman
June 14, 2019
In an interview with Fox News, the president said he believes Conway is a "terrific person" and "tremendous spokesperson."
SHOW TRANSCRIPT

During an interview with Fox News on Friday, the president said he believes Conway is a "terrific person" and "tremendous spokesperson," adding: "It looks to me like they're trying to take away her right of free speech."

On Thursday, the Office of Special Counsel urged President Trump to fire Conway for allegedly violating the Hatch Act, which bars federal employees from participating in certain political activities during the course of their work.

The agency said Conway violated the act on numerous occasions "by making statements directed at ... the failure of candidates for the Democratic Party's nomination for president" in TV interviews and on social media.

And it added if Conway goes unpunished, other federal employees may feel that they don't need to abide by the Hatch Act.

White House deputy press secretary Steven Groves said in a statement the agency's actions against Conway are "deeply flawed and violate her constitutional rights to free speech and due process."