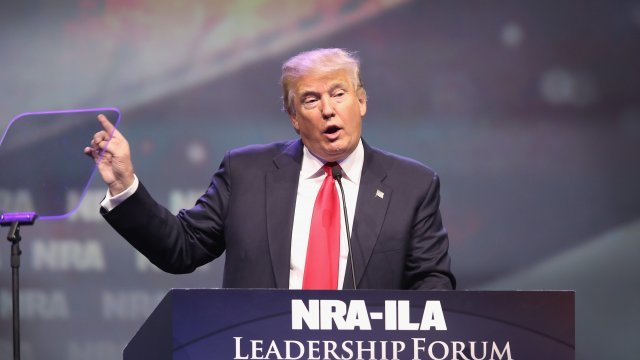 It comes the day after eight states filed a lawsuit against the administration concerning the issue.

A federal judge in Seattle has temporarily blocked the release of downloadable blueprints for 3D-printed guns. He issued a temporary restraining order Tuesday, a day after eight states and the District of Columbia filed a lawsuit against the Trump administration to block the designs from being available online.

The Trump administration settled a lawsuit with an organization called Defense Distributed in June, allowing blueprints for 3D-printed guns, including assault-style rifles, to be legally downloadable starting Wednesday.

But those who opposed June's ruling argued anyone can download the blueprints, including terrorists and people who aren't legally allowed to possess a firearm. The guns are also "virtually untraceable," earning them the nickname "ghost guns."

Trump tweeted Tuesday: "I am looking into 3-D Plastic Guns being sold to the public. Already spoke to NRA, doesn't seem to make much sense!"

The NRA has not publicly responded to requests to comment on the issue.

The president's possible skepticism could be good news for 3D-printed gun critics. At a press conference Tuesday, Sen. Ed Markey, joined by other Democratic senators, urged the president to "fix this deadly mistake that once again your administration has made." He also said if Trump does nothing, he'll be responsible for 3D-printed AR-15s "roaming the streets."

The Seattle judge's decision comes as even some Republicans are citing concerns about the rule. Rep. Ed Royce said, "We can't give terrorists or violent criminals an easier path to obtaining deadly weapons."