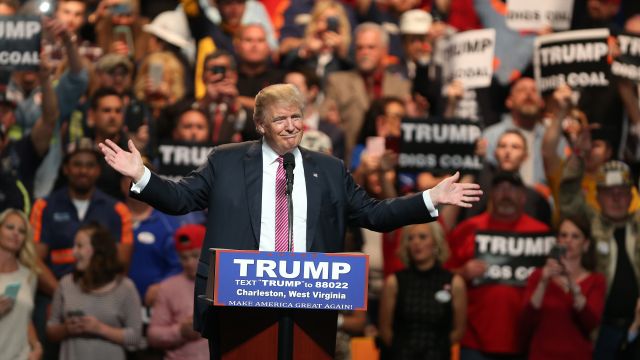 SMS
Trump Says He's 'Allowed To Change' His Stances On Taxes, Minimum Wage
By Ryan Biek
By Ryan Biek
May 8, 2016
In an interview with ABC on Sunday, the presumptive GOP nominee said flexibility is needed.
SHOW TRANSCRIPT

Donald Trump is now predicting a higher tax rate for the rich than what his plan had publicly laid out.

The presumptive Republican nominee had said taxes against the wealthiest Americans would drop from almost 40 percent to 25 percent. Nonpartisan analysts have predicted those cuts would save the top 1 percent of earners $275,000 apiece.

But Sunday on ABC, Trump predicted the tax would end up being higher.

That's led some to suggest Trump may be backtracking on his original plan. Days before, while on CNBC, Trump framed his tax stance around the middle class.

"The middle class, many of them haven't had an effective wage increase in 20 years. They're being taxed at a much higher rate. And they're working much harder. It's supposed to be opposite," Trump said on CNBC.

There have been questions about Trump's flexibility on the issue of minimum wage as well. He's said before that he's against increasing it but told ABC that he's "allowed to change" on both tax plans and the minimum wage.

However, it's not completely clear if Trump now supports a mandated increase in the minimum wage or for the wage to rise through economic processes.