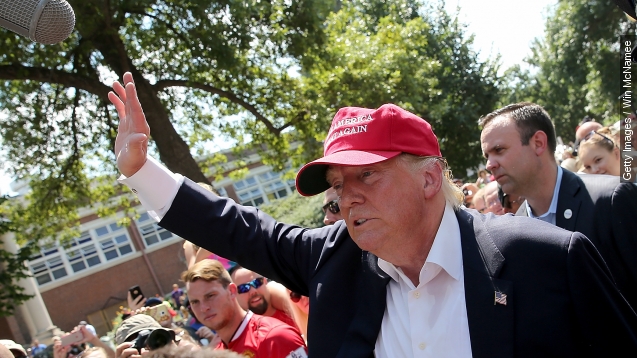 SMS
Trump Says He'll Spend $1B On White House Run If He Has To
By Evan Thomas
By Evan Thomas
August 16, 2015
Donald Trump said he'd commit $1 billion of his own money to his White House run. That's 10 times more than the current most expensive campaign.
SHOW TRANSCRIPT

"It's irrelevant. I make $400 million a year, so what difference does it make? How much? A Billion? Yeah, I would do that," Trump said as he answered reporters' questions. (Video via CBS)

In that case, he’s got some ground to make up. A New York Times report showed as of Aug. 1, Trump had raised $1.9 million to his campaign, compared to the more than $120 million of current financial front-runner Jeb Bush.

But Trump says Bush's funding — most of which came from affiliated political action committees — has strings attached.

"Jeb Bush is a puppet to his donors. There’s no question about it," Trump said. (Video via USA Today)

Now that the Iowa State Fair and its stick-mounted foods are done with, the focus returns to policy.

On Sunday's "Meet the Press," Trump discussed his immigration plans and says he will release proposed changes to tax codes next month. (Video via NBC)