Trump Pushes Back Against Reports He May Fire Special Counsel Mueller 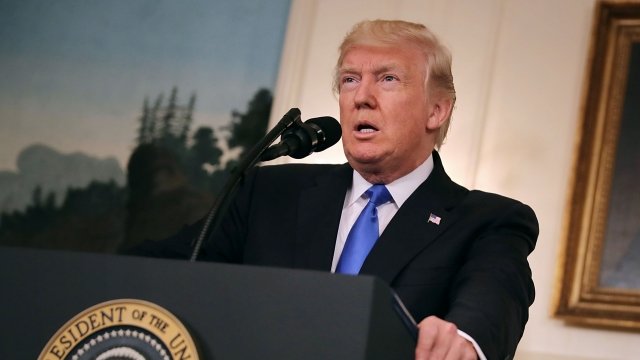 After some speculation about the job security of special counsel Robert Mueller, President Donald Trump said he's not going to push for Mueller's firing.

"You say, 'Oh, I'm going to dismiss him.' No, I'm not dismissing anybody. I mean, I want them to get on with the task. But I also want the Senate and the House to come out with their findings," Trump said at a security briefing.

Mueller is investigating potential collusion between Russia and Trump's campaign, something the president has consistently said never took place.

Though Trump said he hasn't even thought about firing Mueller, he did tell The New York Times in July that Mueller never should have been appointed in the first place.

He also said if Mueller probed his family finances that would cross a red line.

And in June, Trump's friend Chris Ruddy said the president was considering asking the Justice Department to get rid of Mueller.

Those comments apparently got lawmakers' attention. Two different bipartisan bills were introduced in the Senate to protect special counsels from being dismissed unilaterally by the president.

Sen. Lindsey Graham said any attempt to remove Mueller "could be the beginning of the end of the Trump presidency."

Trump's reticence to fire Mueller comes just as the investigation is reportedly picking up steam; Mueller reportedly impaneled a grand jury to strengthen the probe.