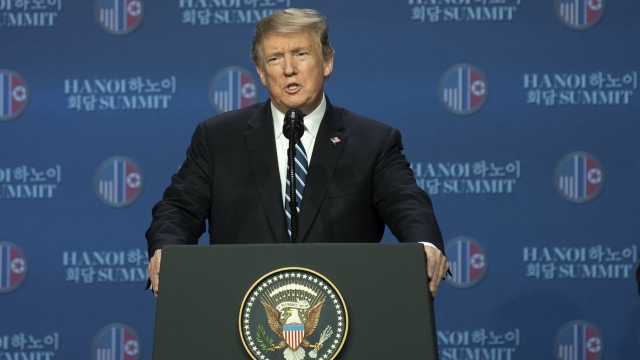 Warmbier was arrested in North Korea in 2016 for trying to steal a propaganda sign, and he was sentenced to 15 years of hard labor in prison. He was released and returned to the U.S. in June 2017, but he was in a coma and had suffered major brain damage. He died a few days later.

Thursday's press conference marked the end of the second nuclear summit between the U.S. and North Korea, and though no deal was reached, the president spoke warmly about the meeting with Kim.

President Trump said: "This wasn't a walk-away like you get up and walk out. This was very friendly."

President Trump's support of Kim despite allegations against him continues a pattern of controversially supporting other world leaders. Last year, the president stood by Saudi Arabia when Crown Prince Mohammed bin Salman was blamed for the murder of American journalist Jamal Khashoggi, despite a U.N. report that concluded the prince was responsible. He has also said he believes Russian President Vladimir Putin's assertion that Russia didn't interfere in the 2016 election, even though U.S. intelligence found it did.