Trump Accuses Germany Of Being 'Totally Controlled' By Russia 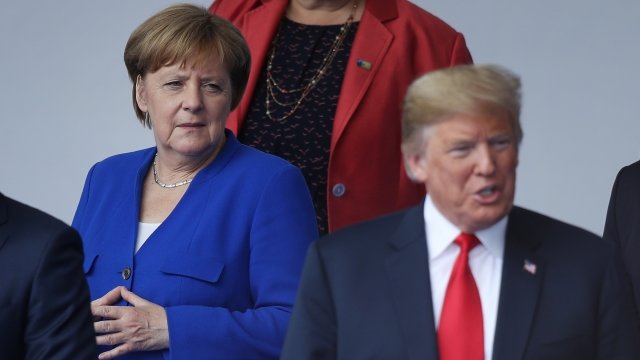 SMS
Trump Accuses Germany Of Being 'Totally Controlled' By Russia
By Briana Koeneman
By Briana Koeneman
July 11, 2018
President Trump accused Germany of being "a captive of Russia" because of its reliance on Russian energy, calling their relationship "inappropriate."
SHOW TRANSCRIPT

President Donald Trump had some harsh words for Germany as the NATO summit kicked off in Brussels Wednesday.

During a meeting with NATO Secretary General Jens Stoltenberg, Trump accused Germany of being "a captive of Russia" because of its reliance on Russian energy, calling their relationship "inappropriate."

Here's why Trump is upset. Germany has been pursuing a pipeline for years that would carry Russian natural gas underneath the Baltic Sea to central Europe, despite criticism from the U.S. and other countries.

And Trump says it's unfair that the U.S. is paying for European defense against Russia while Germany is supporting energy deals with Moscow.

"It certainly doesn't seem to make sense that they pay billions of dollars to Russia, and now we have to defend them against Russia," Trump said.

The Guardian quotes her as saying, "I have experienced myself how a part of Germany was controlled by the Soviet Union. I am very happy that today we are united in freedom, the Federal Republic of Germany."