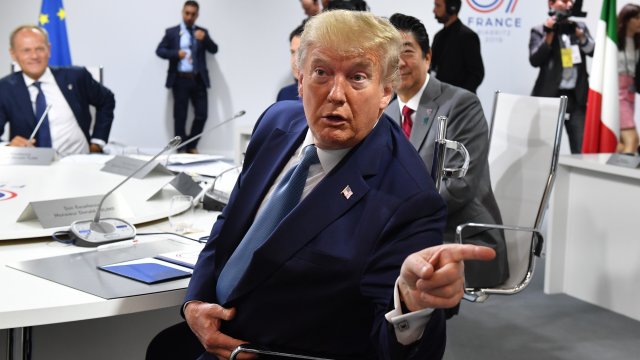 SMS
Trump Says China Wants To 'Get Back To The Table' For Trade Talks
By Briana Koeneman
By Briana Koeneman
August 26, 2019
President Donald Trump says China has reached out to the U.S. about restarting trade talks between the two countries.
SHOW TRANSCRIPT

"China called last night our top trade people and said, 'Let's get back to the table.' So we will be getting back to the table, and I think they want to do something," President Donald Trump said.

President Trump says China has reached out to the U.S. about restarting trade talks between the two countries.

The president made those comments on the sidelines of the Group of Seven summit in France Monday. He told reporters China understands "this is the right thing to do," and he predicted both sides are "going to make a deal."

This is quite the turnaround, considering how much the ongoing trade war between the U.S. and China has escalated during the past few days.

The president lashed out at President Xi Jinping on Twitter, and China vowed to continue fighting the trade war "until the end."