Trump Suggests China Trade Deal Can Wait Until After 2020 Election 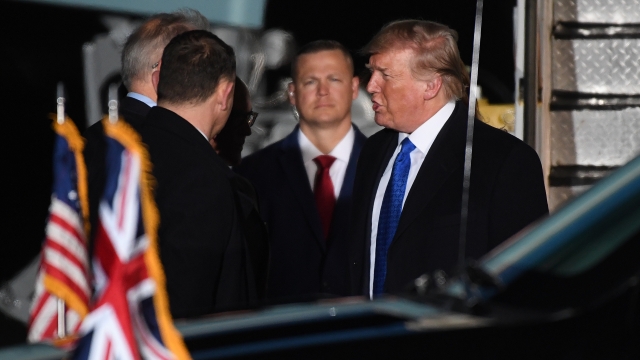 President Trump says he's in no hurry to resolve the trade war with China. And he's ratcheting up tariff tensions with Brazil, Argentina and — now — France.

The president expounded on that, and more, while appearing at the NATO summit in London. Financial markets around the world quickly took a hit, with stocks tumbling on renewed trade fears.

U.S. stock futures started falling when President Trump suggested he was fine with potentially delaying a trade deal with China until after the 2020 U.S. presidential election. The U.S. and China face a Dec. 15 deadline for new tariffs to go into effect, without an agreement.

In London, the president said the U.S. is "doing very well right now" because he provided $28 billion in subsidies to U.S. farmers impacted by lost trade to China. And he said a Chinese trade deal "is dependent on one thing: Do I want to make it?"

Michael Hewson, chief analyst for CMC Markets In London, said Trump's comments are spiking economic anxieties because "investors have been assuming, somewhat naively perhaps, that the new 15th December tariffs might well get waived, or delayed."

Meanwhile, more trade uncertainty is resulting from President Trump's declaration that the U.S. will reimpose steel and aluminum tariffs on Brazil and Argentina. Economist Phil Levy wrote in Forbes Monday: "The effect is more symbolic than economic. It portends new fronts on the trade war."