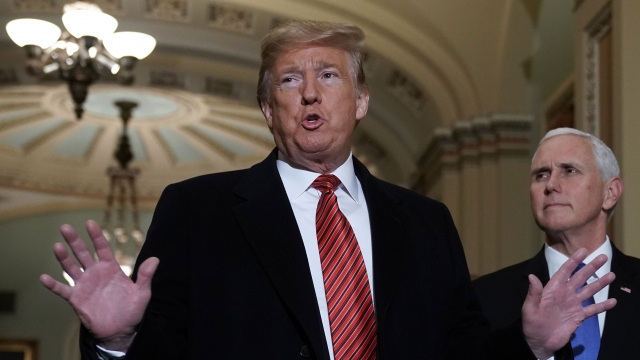 The president and Democratic lawmakers are still at an impasse over funding for border security as the partial government shutdown nears the end of week three.

President Donald Trump met with bipartisan lawmakers on Capitol Hill Wednesday but said his meeting with the Democrats was "a total waste of time." He said he asked House Speaker Nancy Pelosi and Senate Minority Leader Chuck Schumer if they would approve a border wall if he ends the shutdown, and that Pelosi said no.

Schumer told reporters President Trump then walked out of the room.

"He said, 'if I open up the government, you won't do what I want.' That's cruel, that's callous, and that's using millions of innocent people as sort of pawns. And it was wrong," said Schumer.

As the partial shutdown enters the 20th day, Pelosi says many government workers will struggle to make their mortgage, rent and car payments.

"It is so sad that in a matter of hours or just a few days, many federal workers will not be receiving their paychecks, and what that means in their lives is tragic," said Pelosi.

Around 800,000 federal workers are estimated to be affected by the partial shutdown, with over half of them being forced to work without pay.

After his meeting with GOP leaders, the president said his party is working together.

"There was no discussion about anything other than solidarity. We want national security and border security for our country," said President Trump.

Later in the day, the House approved legislation to reopen the IRS, Treasury Department and other federal agencies. The bill will head to the Senate for approval, but it's unlikely to pass.