As Tens Of Thousands Brits Plan Protest, Trump Says The UK Likes Him 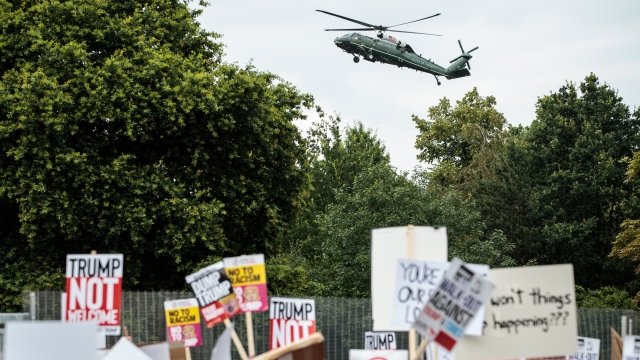 SMS
As Tens Of Thousands Brits Plan Protest, Trump Says The UK Likes Him
By James Packard
By James Packard
July 12, 2018
Polls show the U.K. is pretty anti-Trump. But when the president says they agree with him on immigration, he might have a point.
SHOW TRANSCRIPT

More than 1,000 protesters met President Donald Trump when he showed up in the U.K. on Thursday, sounding off against his policies and his presidency at large. And while he might not have actually come face to face with his detractors, he certainly heard plenty about them.

"Your trip to the U.K., there are lots of protests planned in London and elsewhere. How do you feel about that?" The Guardian's Ewen MacAskill asked Trump at a news conference Thursday.

"I think it's fine," Trump responded. "I mean, I think they like me a lot in the U.K. I think they agree with me on immigration."

OK, so there are a couple of points to unpack here. First, the president saying he thinks people in the U.K. like him a lot. He might think that, but polls say otherwise.

According to a YouGov poll put out today through ITV Tonight, 77 percent of Brits have an unfavorable view of President Trump. A BMG poll for The Independent showed 42 percent of people thought it was wrong to invite Trump to the U.K.

But on the immigration front, the president might have a point.

According to YouGov, 63 percent of people there think the rate of immigration into Britain over the last decade has been too high.

And the same YouGov polls showed Brits are open to taking in more people who want to work in health care, highly educated people, those looking to study and those looking to invest. But the poll showed people aren't as enthusiastic about welcoming people who want to join family members already in the U.K. or people with low levels of education looking for low-paid work.

That might reflect a similar sentiment to that behind the president's proposals for a merit-based immigration system.

But other polls paint a different picture. A European Commission report shows 63 percent of people in the U.K. think immigrants have a positive impact on society.

And without the president mentioning specific policy, it's hard to know exactly to what extent people in the U.K. agree or disagree with him. But one thing's for sure: A lot of Brits don't like him. Tens of thousands of people were expected to protest his visit Friday.