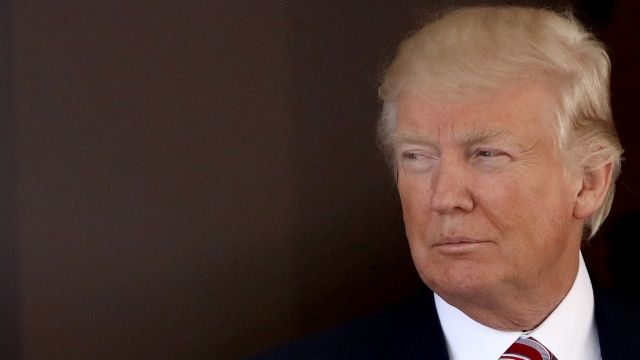 President Donald Trump continued to use the London terrorist attack to promote his rejected travel ban on Twitter Monday.

And his word choice in these most recent tweets could do more harm than good when it comes to getting that ban reinstated.

In a series of tweets Monday, Trump urged the Justice Department to ask for an expedited Supreme Court hearing on his embattled executive order.

He wrote, in part: "I am calling it what we need and what it is, a TRAVEL BAN! ... The Justice Dept. should have stayed with the original Travel Ban, not the watered down, politically correct version they submitted."

Here's the potential problem: By suggesting his new order is a "watered down" version of the original, Trump is contradicting the Justice Department's argument that the revised order is different from the first.

And directly using the word "ban" makes it clear that the order isn't just an enhanced vetting system, as the Trump administration has said in the past.

These tweets could come back to bite Trump if his lawyers defend the executive order in front of the Supreme Court.

After all, in lower court rulings, judges have pointed to Trump's own words as a reason to block the executive order.

But the White House doesn't seem concerned about the tweets' impact on the case.

"Is the President concerned that he may be tainting the waters of the legal system by issuing such tweets?" Fox News White House Correspondent John Roberts asked during a White House press briefing.

"Not at all," Huckabee Sanders responded. "The president is very focused on exactly what that order spells out, and that's protecting Americans, protecting national security and he has every constitutional authority to do that through that executive order."

The White House confirmed Monday afternoon that Trump has officially asked the Department of Justice to seek the expedited Supreme Court hearing he suggested in his tweet earlier in the day.

Last week, the Department of Justice asked the Supreme Court to issue an emergency order to reinstate the travel ban. The court says any responses to that request must be submitted by June 12.