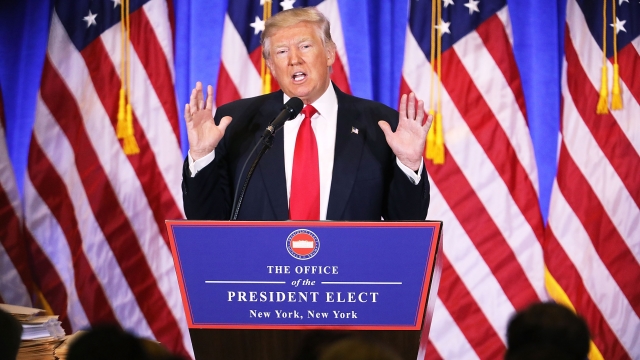 U.S. presidents usually hit some of their highest approval numbers between their win  and their inauguration.

But that's not the case with the new president-elect. According to a new Gallup poll, Donald Trump's transition approval rating is at just 44 percent. That's actually 4 percentage points down from last month.

That's the lowest transition approval in Gallup's history of polling — even lower than that of former President George W. Bush, who had 65 percent approval days before he was sworn in.

There are likely a few reasons why Trump's number is so low and continues to drop. America's political polarization has never been so stark, and it shows in the poll.

And Trump's transition has been full of drama and scandal, from the intelligence community's reports on the alleged Russian hacking to discussions of his business conflicts of interest that still exist.

Americans also don't seem to love the president-elect's Cabinet picks or high-level appointments, with 44 percent saying they're below average or poor.

And this poll isn't the only one that shows low approval numbers. A recent Quinnipiac University survey found just 37 percent of voters approved of the way Trump's handling his job.

If those numbers hold, Trump's administration will move in with the lowest approval rating in modern presidential history.