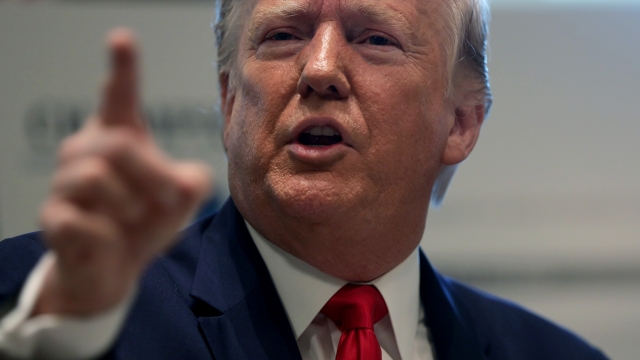 SMS
Trump's Tax Return Case Could Soon End Up At The Supreme Court
By Briana Koeneman
By Briana Koeneman
October 22, 2019
The Manhattan District Attorney's Office outlined the deal to the 2nd Circuit Court of Appeals in a letter Monday.
SHOW TRANSCRIPT

The legal battle over President Donald Trump's tax returns could soon end up at the Supreme Court — thanks to an agreement between the president's lawyers and the Manhattan district attorney.

Attorneys from District Attorney Cyrus Vance Jr.'s office outlined the deal to the 2nd Circuit Court of Appeals in a letter Monday.

The attorneys said they'll hold off on trying to enforce a subpoena against President Trump's accounting firm, Mazars USA.

In exchange, the president's legal team agreed to petition the Supreme Court within 10 days if they lose an appeal that's scheduled to be argued on Wednesday.

President Trump's lawyers also said, if they end up appealing, they'll ask the high court to hear the case this term, which would enable the justices to make a decision ahead of the 2020 election.

Vance Jr. subpoenaed eight years' worth of President Trump's personal and corporate tax returns from Mazars USA. His office has been investigating the Trump Organization and looking into payments allegedly made on the president's behalf to Stormy Daniels.

Earlier this month, a lower court ruled Mazars had to hand over the documents in question. That decision is the subject of Wednesday's appeal.