Trump's Tariffs Could Lead To Showdown With World Trade Organization 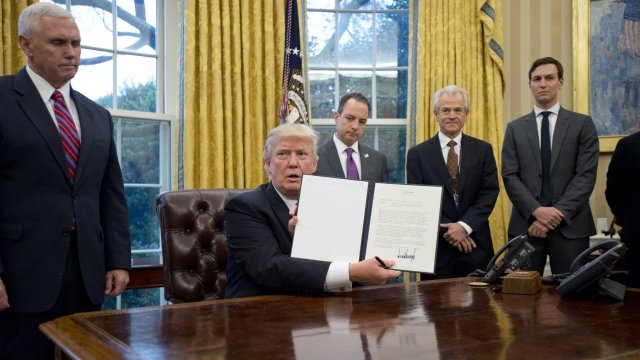 SMS
Trump's Tariffs Could Lead To Showdown With World Trade Organization
By Jake Jones
By Jake Jones
March 6, 2018
Some experts worry the president's tariff plan — and its backlash — could give the president a reason to take the U.S. out of the trade group.
SHOW TRANSCRIPT

President Donald Trump's talk of metal tariffs could put his administration at odds with the World Trade Organization. Some experts worry the move could even give the president a reason to take the U.S. out of the trade group.

A White House trade adviser called that idea "provocative," but didn't outright say Trump wouldn't do such a thing.

If Trump does impose steep tariffs on foreign steel and aluminum, it will put the WTO in an awkward position. It's likely countries impacted by the tariffs will go to the group to challenge them.

The WTO has been reluctant to rule against that argument. Its rules allow countries to determine their own national security threats and protect vital national industries.

But Trump's assertion that steel is a necessary component of a strong national defense — something the Department of Defense contradicted — could open the door for other countries to make similar broad moves against free trade in the name of national security.