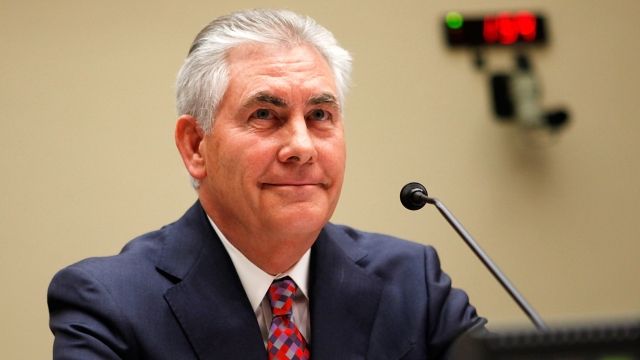 SMS
Trump's Secretary Of State Pick Has A Big Reason To Be Nice To Russia
By Eugene Daniels
By Eugene Daniels
December 13, 2016
If sanctions against Russia are ever lifted, Exxon could make millions upon millions of dollars.
SHOW TRANSCRIPT

Donald Trump's pick for secretary of state has ties with Russia that could lead to some serious conflicts of interest.

In addition to building strong personal ties with Vladimir Putin, Exxon CEO Rex Tillerson spearheaded his company's dealings with Russia after the end of the Soviet Union, and his company has been active there for decades.

Tillerson has been a huge opponent of the U.S. sanctions levied on Russia after the country invaded eastern Ukraine. Those sanctions halted projects worth a whole lot of money for Exxon — it's estimated to be up to $1 billion.

Tillerson wants those sanctions gone. And as secretary of state, he could play a major role in lifting them and making Exxon a lot of money in the process.

For example, after the sanctions were put in place, the U.S. government forced Exxon to stop offshore drilling with Russia in the Arctic, leaving a $700 million project basically worthless.

Eventually, Exxon found 750 million barrels of brand new oil for the Russian government. That oil field has been named after the Russian word for "victory."

That's just one of the projects Exxon Mobil, in which Tillerson owns at least $218 million in stock, could continue working on if the sanctions are ever lifted — something the secretary of state's office is in charge of.