The Soundtrack Of A Trump Rally: Rock, Pop And... Broadway? 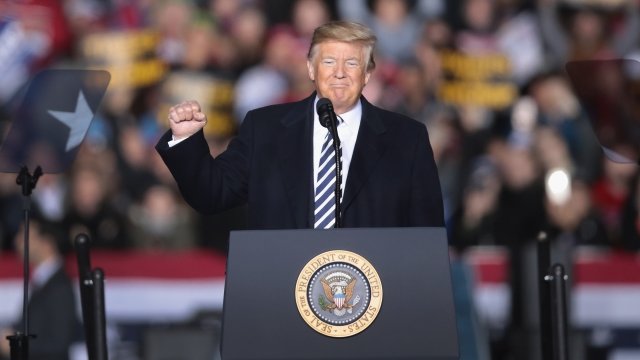 SMS
The Soundtrack Of A Trump Rally: Rock, Pop And... Broadway?

By Casey Mendoza
November 5, 2018
The music played at Trump rallies are pretty eclectic, to say the least.
SHOW TRANSCRIPT

["USA USA USA"] The sounds of any political rally are pretty predictable ["TRUMP TRUMP TRUMP"]. You'll hear chants, cheers and the song "God Bless The USA" at least once throughout the entire event.

And when Air Force One touches down, you'll probably also hear music from the movie "Air Force One." It's pretty on-the-nose and not surprising in the slightest.

But sometimes, a song will start playing and you'll have no idea why. [Daylight! I must wait for the sunrise!]

Yes, that is the song "Memories" from the Broadway musical "Cats" playing at a rally for President Donald Trump. We weren't the only ones confused.

The explanation? We can't really give you one, but we can tell you that Trump has voiced his love for Broadway composer Andrew Lloyd Webber before.

Broadway star Betty Buckley — who sang "Memories" in the original production of "Cats" — doesn't reciprocate that love, and said the president's use of the song at rallies was "terrible." 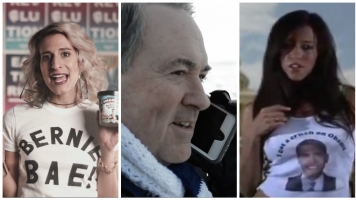 [I want it that way...] The president reportedly picks and takes a lot of pride in the music played at his rallies. Other songs we heard include Backstreet Boys' "I Want It That Way," Celine Dion's "My Heart Will Go On" and Rihanna's "Don't Stop The Music." [Please don't stop the music.]

It's a wide-ranging collection of music, to the say the least. But like "Memories" and Betty Buckley, not every artist is okay with their songs being played.

Musicians like Elton John, The Rolling Stones, and Queen, as well as the estates of George Harrison and Luciano Pavarotti, have each denounced Trump's use of their music at rallies.

Rihanna wasn't aware her song was being used until Sunday, after a reporter pointed it out on Twitter. She responded by saying "not for much longer...," which raises the question: can musicians actually stop politicians from using their songs at rallies? 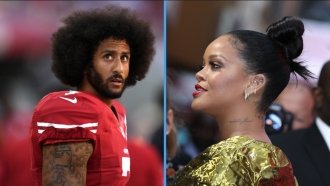 Campaigns don't need to ask artists directly to use their music, but they do need to seek public performance licenses. In the U.S., those licenses can come from either The American Society of Composers, Authors and Publishers or Broadcast Music Inc. Both organizations have a separate license for political entities, and artists — such as Steven Tyler and Queen — can have songs opt out of that.

But let's say rallies are "properly licensed." Can artists still take legal action if they don't want their songs to be played? Yes.

ASCAP notes that campaigns can be liable for damaging the image of an artist, diluting the trademark of the artist's name, or implying artists' endorsement. Because of these liabilities and risks, ASCAP suggests that campaigns seek direct permission from artists and their management — on top of the public performance licenses.

If campaigns don't, they might have to face the truth: You Can't Always Get What You Want.