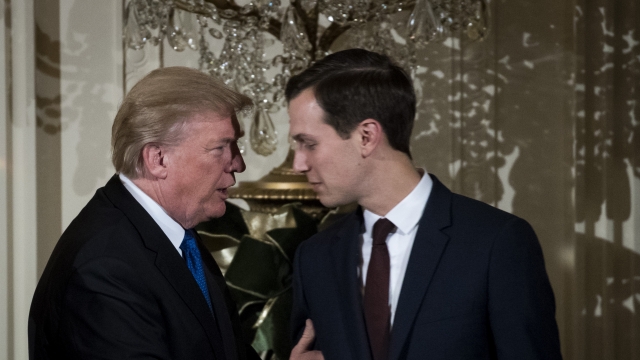 "With one voice, we vow to crush the monstrous evil of anti-Semitism, whenever and wherever it appears. And we're working very hard on that."

Those were President Trump's remarks during a Hanukkah celebration at the White House on Wednesday, just before he signed an executive order expanding the federal definition of anti-Semitism under Title VI of the Civil Rights Act.

The measure — crafted by Jared Kushner, the president's senior adviser and son-in-law — says discrimination against Jews can be a violation of Title VI when "based on an individual's race, color or national origin."

It also refers federal agencies to consider a definition of anti-Semitism adopted in 2016 by the International Holocaust Remembrance Alliance, or IHRA, of which the U.S. is a member. The IHRA's definition cites a number of provisions, but states "criticism of Israel similar to that leveled against any other country cannot be regarded as anti-Semitic."

The executive order aims to protect Jewish students and tackle what the Education Department views as anti-Semitic curricula or anti-Israel bias in higher education. And it was welcomed by Jewish groups like the Anti-Defamation League and the Republican Jewish Coalition.

At the White House event, President Trump noted the measure would enable the agency to withhold federal funding from "universities and other institutions that engage in discrimination" or "traffic" anti-Semitism.

The order specifically says it wouldn't infringe on any First Amendment rights. But some critics are still worried that the White House intends to use the order as a cudgel against speech critical of Israeli policy and the ongoing occupation of Palestinian territories, which is illegal under international law. Academics also raised concerns over political intrusion into the classroom being disguised as federal oversight.

For what it's worth, the lead author of this definition has previously cautioned against applying the adopted definition to higher education or using it to police on-campus speech.

Omar Baddar, the deputy director of the Arab American Institute, told Newsy on Wednesday that anti-Semitism is "a real, deadly and rising problem" in the U.S. He said the executive order does a disservice to the discussion of that issue.

He said: "It pretty much restricts our ability to have an honest conversation about Israel, about U.S.-Middle East policy — and that goes against free expression."

The New York Times initially reported on Tuesday that the measure would reinterpret Judaism as a nationality, not just a religion.

In an editorial on Wednesday about the contents of the order, the Times' editorial board said "anti-Israel speech ... makes some Jews feel unsafe, especially those who feel that Zionism is intrinsic to Jewish identity."

In a separate editorial published in the Times ahead of the White House event, Kushner clarified that the executive order "does not define Jews as a nationality." But he emphasized that "anti-Zionism is anti-Semitism."

Neil Strauss is the national spokesman for the Republican Jewish Coalition. He called President Trump the most "pro-Jewish" president ever, dismissing allegations that the president has made anti-Semitic statements in the past. He added that the executive order prevents anti-Semitism from being couched as anti-Zionism.

"The people protesting against Jewish students have no idea what those Jewish students' feelings on Israel were. But [critics of Israeli policy] realized they couldn't say, 'No Jews allowed,' 'Jews out,' 'Jews can't hold these positions.' But what you can say is, 'We don't want people who support Israel in those positions' — somehow that became palatable. And what we're saying is that's no longer palatable, either."

Left-wing Jewish groups took issue with the order linking anti-Semitism with anti-Zionism. Logan Bayroff, the communications director at J Street, said Judaism and Jewish identity can be "very complicated." He described the order as a "cynical attempt" by the Trump administration to "exploit the legitimate concerns" American Jewish communities have about their safety.

"The important bottom line for people to take away from this executive order is that it's not really about trying to define or make a statement about Jewish people. It's about trying to suppress and silence the free speech of those, Jewish or non-Jewish, who have this wide range of criticisms of Israel. And those are the folks who, unfortunately, are going to be targeted and victimized by this."

It's worth noting that another administration could overturn President Trump's executive order in the future, just as the current administration has attempted to do with some orders issued by President Obama.