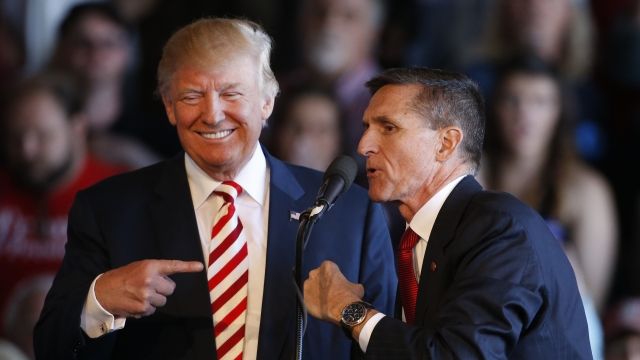 SMS
Trump's National Security Adviser Shares Disdain For CIA
By Jake Jones
By Jake Jones
December 13, 2016
Michael Flynn, who will be filtering intelligence information before it gets to Donald Trump, isn't on great terms with the intelligence community.
SHOW TRANSCRIPT

Flynn used to head the Defense Intelligence Agency until his resignation in 2014. At the time, The Washington Post reported Flynn was forced out due to his "chaotic" management style, which was met with "resistance from both his superiors and subordinates."

Flynn also has the unfortunate distinction of leading the agency during the massive intelligence leak at the hands of Edward Snowden.

Flynn has caught criticism for his ties with Russia, having accepted payment from state-owned media outlet RT to speak in Moscow. He's also trafficked in fake news and conspiracy theories for years on his social media accounts.

His views on Islam have also turned a few heads. He called the religion a "cancer" that needed to be "excised" from all 1.7 billion practicing Muslims around the world. With Flynn headed to be one of the few voices in Trump's ear, fears of a Muslim ban or Muslim registry become much more realisitc.

Trump has already caused concern by taking intelligence briefings only sparingly since he's "like, a smart person." Trump has also bashed the intelligence community publicly over claims of evidence Russia interfered in the election to help him win.

He's even gone so far as to criticize the CIA and others, pointing to false reports of nuclear weapons in Iraq.

So it's worrisome that the person who will be filtering intelligence information before it gets to Trump isn't on great terms with the intelligence community, either.