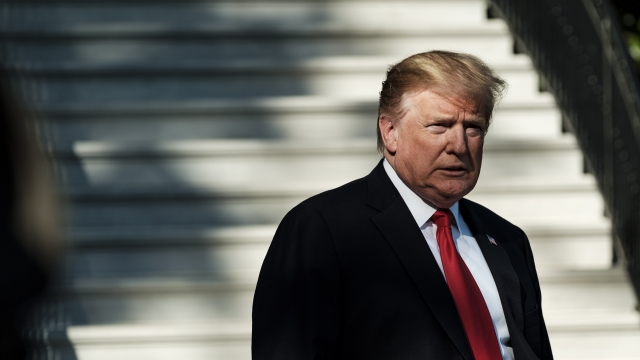 The federal judge said as long as the request for President Trump's financial records serves a legislative purpose, it's "facially valid."

President Donald Trump's lawyers are appealing a federal judge's decision not to block House subpoenas to Mazars USA, the accounting firm in possession of years of the president’s tax returns.

In his opinion, Judge Amit Mehta said Congress has the right to request the tax records as long as doing so serves a legislative purpose.

The House Oversight and Reform Committee first issued the subpoena in April to investigate claims made by Michael Cohen. He accused the president of altering financial statements prepared by his accounting firm. President Trump followed up by launching a lawsuit against the committee's chairman, saying the subpoena lacked a legislative purpose.

The committee argues the financial documents might help it determine "whether ethics statues or regulations need updating," promote transparency and accountability among the executive branch and explore potential legislation regarding the acceptance of foreign gifts or income by the president. Mehta said those reasons are "facially valid."

As far as President Trump’s claim that the record request is politically motivated? The judge said "it's not for the court to question whether the Committee's actions are truly motivated by political considerations."

President Trump's lawyers are contesting several congressional subpoenas and investigations. He currently has lawsuits open in both Washington and New York further disputing the information request.

Correction: A previous version of this story said President Trump filed a lawsuit against the House Oversight and Reform Committee. The lawsuit was filed against the committee's chairman. This story has been updated. Additional reporting by Newsy affiliate CNN.

Nnamdi Egwuonwu is a content producer at Newsy. Though he writes a variety of stories, he enjoys highlighting those with a culture or social issue focus. When he's not at Newsy, Nnamdi also produces, anchors and reports for KOMU-TV, a local NBC station based out of Columbia, Missouri. He'll be graduating from the University of Missouri in May 2019 with a bachelor's degree in journalism, emphasizing in convergence television reporting, and minors in business and sociology. Nnamdi is from Atlanta, Georgia, and of Nigerian heritage. In 2016, he traveled back to Nigeria in a trip that marked the first of several international ventures. Since then he's been to Cuba, Spain, Italy, Belgium, the Czech Republic and China, where he covered the 2018 China Open Tennis Tournament. One of Nnamdi's passions within journalism is lending a voice to marginalized communities or those who often go unheard. He hopes to continue incorporating elements of this within his work during his time at Newsy. Nnamdi one day hopes to interview Bill Gates, Oprah Winfrey, Beyoncé and J. Cole.