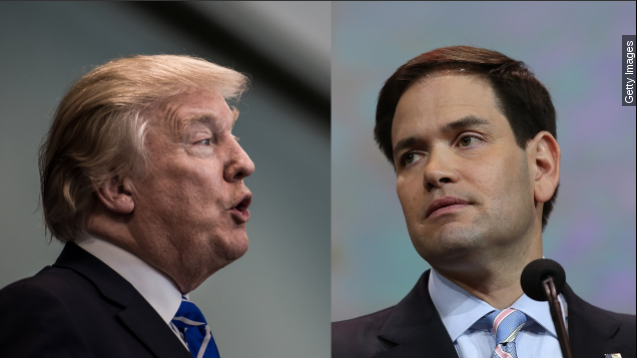 Donald Trump has a lot of people in his crosshairs. Now, it seems Senator Marco Rubio has become the latest target of one of Trump's favorite insults: lightweight.

It all started with this tweet, saying, "Senator Marco 'amnesty' Rubio, who has worst voting record in Senate, just hit me on national security-but I said don't go into Iraq. VISION"

Then at an event in South Carolina this week, Trump got personal, saying, "He's overly ambitious, too young — and I have better hair than he does, right?"

And, he brought up Rubio's issues with student loans, mortgages and debt.

"Marco Rubio has no money. Zero. It's OK, maybe it's good to say you owe money because you over-borrowed," said Trump. (Video via CNN)

The slams come after Trump and Rubio got into it over a number of issues during the CNN debate, including a disagreement about foreign policy. Rubio is a member of the Senate Committee on Foreign Relations.

Trump: I believe that I will get along — we will do — between that, Ukraine, all of the other problems, we won't have the kind of problems that our country has right now with Russia and many other nations.

Tapper: Why would President Rubio's approach be more effective than President Trump's?

Rubio: Well, first of all, I have an understanding of exactly what it is Russia and Putin are doing, and it's pretty straightforward.

Trump's numbers have stayed fairly steady at the top of the polls since the debate, while Rubio has seen gains.