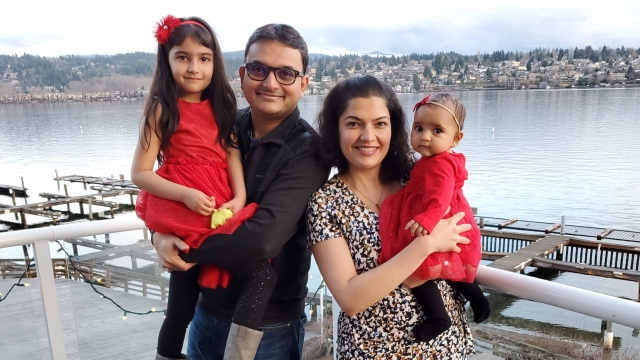 The Trump administration has implemented a freeze on most temporary workers traveling from abroad. The freeze is meant to bolster the U.S. economy. But it's also keeping hundreds of immigrant families separated, including those with American kids.

"It's really stressful because I have got two little daughters who are back in the U.S. And when I talk to them, the only question they have to ask is, 'When are you coming back?'" said Karan Murgai, a long-time Indian immigrant whose kids are American.

Murgai has been living and working legally in the U.S. for 10 years as a business consultant. He flew to India at the beginning of March because his father passed away. Before returning to the U.S., he knew he'd need a new visa stamp. But the U.S. Embassy shut down, and he got stuck in India.

"My wife, she has to manage her work. She has to manage both the girls, the house, the bills, the mortgage, the car loans, so it's getting really stressful for her because a single person can only do so much," said Murgai.

For months, Murgai has been waiting for the U.S. Embassy to reopen so he can return to his family in Dallas. But last week's executive order prevents him from entering the U.S. for at least another six months.

"When do I really get to see my family again?" Murgai asked.

He is one of thousands of people stuck abroad who are included in the ban because at the time of the proclamation, their visa renewal had not been finalized.

"Even in my worst nightmare, I wouldn't have thought something like this would happen," said Namita Telang, a telecom engineer who has been living in Seattle for 13 years thanks to a visa for high-skilled workers, known as H-1B.

Telang traveled to India in early March with her two American daughters to introduce the youngest one to her family there. They've been stranded and away from her husband ever since because the embassy closed before she was able to renew her visa.

"My fingerprinting appointment was done and my interview got canceled. At that point I was like, 'Yeah, OK, I understand it's a pandemic.' But then this proclamation order came in, and it just shattered all the hopes that we were going to reunite anytime soon," Telang said.

The proclamation bans her from the U.S. until at least 2021.

"It just feels like you've been locked out of your home," she said.

The White House says the new visa measures are necessary to free up jobs for millions of Americans who are unemployed due to the pandemic.

But Telang and Murgai have kept their U.S.-based jobs despite being stranded in India. They hope the White House will amend the order and add an exemption for people in their situations.