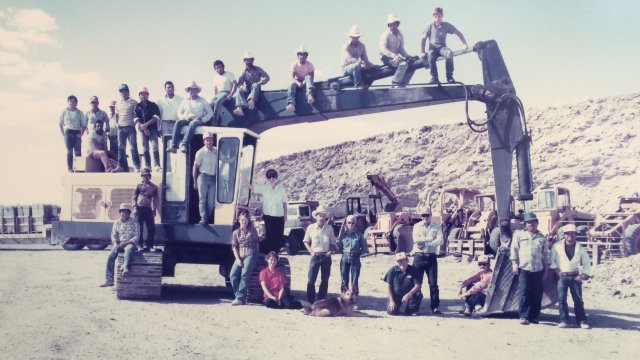 This week, the Trump administration implemented a freeze on most temporary workers traveling from abroad. The White House argues the freeze will help the U.S. economy recover. But some seasonal and remote blue-collar jobs are simply not desirable for American workers.

"It's labor-intensive. There's a lot of hard work. It's outside. It's dusty. It's dirty," said Sara Zollinger, a manager at Scrivanich Natural Stone.

"It's really hard to attract an American that needs a 12-month paycheck to take a five-month job," said Greg Osterhout, president of Northern Stone Supply.

Osterhout and Zollinger manage two different Idaho stone mining companies. For decades, they have relied on Mexican guest workers to extract quartzite from nearby quarries from May to October.

"I offer the shortest season. And so I'm the last one to be able to compete to hire local people," said Osterhout.

"We're in a town of 700 people. There's five different quarries all trying to find workers to do the same type of work," said Zollinger.

The temporary workers come for the mining season and then go back home.

"Most of our workers are third-generation. Their grandfathers and fathers worked for us years ago," said Osterhout.

But this year, both companies' application for around 70 guest workers didn't make the cut.

"This is the first time in over 30 years," Osterhout said.

With millions of Americans suddenly unemployed as a result of the pandemic, the government is scaling down the H-2B visa program. In April, the White House canceled plans to add 35,000 visas to the program's annual 66,000 limit. And this week, it froze the issuance of these visas for people abroad for the rest of the year, with exceptions for food supply-chain businesses. As a result, the Idaho stone mining industry is hurting.

"I have the orders and the demand. I just don't have the production crew," said Zollinger.

"I'm looking at possibly the first time in the history of our business having to lay people off," said Osterhout.

Osterhout and Zollinger say they may have to fire some full-time American employees to stay afloat. Without guest workers to extract stones, there's no product to process or sell. And they can't find enough Americans to do the job instead.

"We found not nearly enough, but we found five or six college students that really needed to make some money for college the next year. And they're up there working right now," Osterhout said.

Critics of the program say employers should try harder to hire Americans and, if necessary, raise wages. In an email to Newsy, a group that lobbies for immigration restriction said that "the use of guest workers has become the default option for many employers, instead of an option of last resort when they have exhausted all good faith efforts to find American workers."

"I don't doubt that over history, there've been times when somebody has ordered a guest worker that could have hired an American. But there are many, many businesses just like mine who can't be in business without seasonal workers. And we provide a lot of good opportunities to Americans because of the guest workers," Osterhout said.