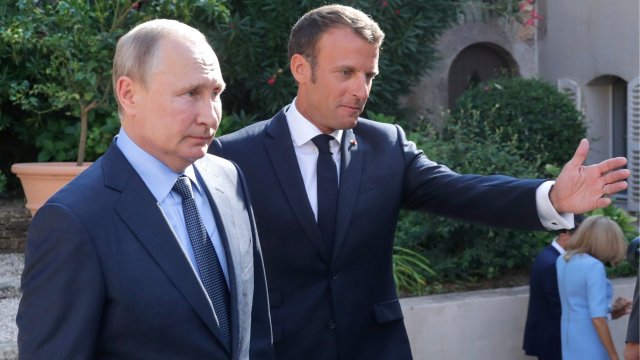 SMS
Russia Seems Unlikely To Reunite With The G-7 Any Time Soon
By Matt Picht
By Matt Picht
August 23, 2019
President Trump wants Russia back in the G-7, but the group's other members — and Russia itself — may not be sold on the idea.
SHOW TRANSCRIPT

Leaders from seven of the world's major economic powers are once again meeting for the G-7 summit — without Russia. But President Donald Trump is pushing for Russia to rejoin the group.

The G-7 — an informal grouping of certain developed countries — used to be called the G-8 back when Russia was still a part of it. The country was expelled in 2014 after it annexed the Crimean peninsula from Ukraine.

The G-7 member states could decide among themselves to readmit Russia, but many of them want to resolve the Crimea issue first. During a meeting with Russian President Vladimir Putin, French President Emmanuel Macron said a solution to Ukraine could be a "magic wand" to let Russia rejoin the bloc.

And Ukraine isn't the only issue standing in the way of Russia's membership. U.K. Prime Minister Boris Johnson said he still wanted to see resolution for the alleged Russian involvement in the 2018 chemical weapons attack in Salisbury, England.

There is some sympathy within the G-7 for Russia. Italian Prime Minister Giuseppe Conte said last year he could support Russia rejoining the bloc. But while Conte will be attending this year's G-7 summit in France, he probably won't have a lot of sway; he tendered his resignation as head of the country's government on Tuesday.

It's worth noting Russia might not even be looking to enter the G-7. While Putin's expressed a willingness to return to the group in the past, he's also shown a preference for working within other international structures like the G-20 instead.