Fact-Checking Trump's Rant About Servers At His Putin News Conference 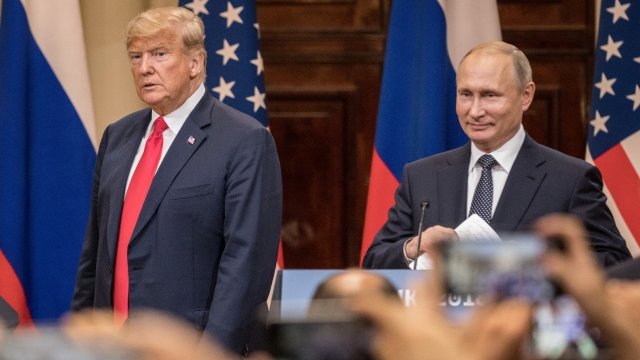 SMS
Fact-Checking Trump's Rant About Servers At His Putin News Conference
By James Packard
By James Packard
July 19, 2018
The president talked about "missing" servers. But no servers are missing, and the rest of his claims paint a very inaccurate picture.
SHOW TRANSCRIPT

You've already heard plenty about President Donald Trump's news conference with Russian President Vladimir Putin on Monday. But during Trump's comments about Russian election interference, he made some claims that didn't spur quite as many headlines. And we should fact-check.

"You have groups that are wondering why the FBI never took the server.  Why haven't they taken the server? " The president said when he was asked if he believed Russia interfered in the 2016 election. "Where is the server? I want to know, where is the server?  And what is the server saying?" he continued. "Dan Coats came to me and some others — they said they think it’s Russia. I have President Putin; he just said it’s not Russia. I will say this: I don't see any reason why it would be, but I really do want to see the server. ... What happened to the servers of the Pakistani gentleman that worked on the DNC? Where are those servers? They’re missing."

OK, so there's a lot happening there. It's hard to know exactly what the president is talking about because he speaks in fragments and doesn't get super specific. Regardless, we should set some things straight. Trump seems to be making one of two claims, if not both: That the DNC servers are missing, or that the servers of a specific person who worked for the DNC are missing; and that there's something to be suspicious of there.

So, going the DNC route: The DNC servers aren't missing. They never were. After the committee was hacked, it hired a private firm to investigate. The firm made copies of the servers, as is typical in cyberattack investigations, and eventually provided them to the FBI. Former FBI Director James Comey testified getting forensics from the private firm was an appropriate substitute for direct access.

Then there's the argument that servers belonging to a specific person who worked at the DNC are missing. Trump references a "Pakistani gentleman." He's likely talking about Imran Awan, a subject of conspiracy theories that tried to tie him to the DNC email hack. The president has tweeted about him before.

Awan worked IT for House Democrats, not the DNC. He came under investigation by the Inspector General's Office, which said he and some of his family members, who worked with him, accessed congressional servers without authorization.

The case ended up in the hands of police and the FBI. The Washington Post reported the investigation might have uncovered breaches of protocol but no theft of information. This month, Awan pleaded guilty to a charge of lying on a loan application unrelated to his job. In his plea deal, the U.S. Attorney's office said the government found no evidence that he removed data from House servers, stole or destroyed info, or improperly accessed or transferred info. And there were no missing servers there, either.

So, while it's not entirely clear what the president was talking about at his news conference, the bits and pieces he mentioned paint a very inaccurate picture.