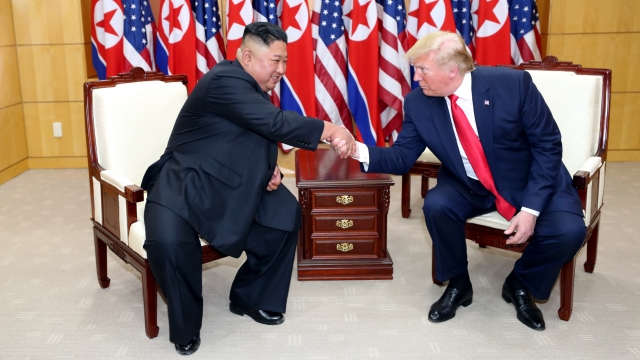 "North Korea best not make any more threats to the United States. They will be met with fire and fury like the world has never seen."

President Donald Trump's rhetoric on North Korea has gone from that ... to this.

"If you take a step forward, you will be the first U.S. president to cross this line."

But what happened in between — and after — those statements?

The U.S. has been trying to convince North Korea to denuclearize for decades. President Trump continued that effort after his election, pressing China to help get North Korea to end its nuclear ambitions.

But the president eventually moved on from that tactic, telling the Financial Times in April 2017 that the U.S. would deal with the North's nuclear weapons program with or without China's help.

North Korea has repeatedly promised it would stop its nuclear development in exchange for food and economic aid. But tensions between the U.S. and North Korea increased as the North conducted multiple missile tests and even threatened to reduce the U.S. to "ashes."

"The United States has great strength and patience, but if it is forced to defend itself or its allies, we will have no choice but to totally destroy North Korea. 'Rocket Man' is on a suicide mission for himself and for his regime."

South Korea eventually took on the role of the peaceful negotiator, even inviting the North to compete in the 2018 Winter Olympics in PyeongChang.

And shortly after that, President Trump agreed to meet with North Korea's leader, Kim Jong-un, for the first time ever. While in Singapore in June 2018, the two leaders signed an agreement where Kim "reaffirmed his firm and unwavering commitment to complete denuclearization," in exchange for the U.S. "[providing] security guarantees."

As part of that agreement, North Korea returned the remains of dozens of U.S. service members who fought in the Korean War.

Despite the deal, 2018 closed out without many concrete moves toward denuclearization. The North wanted the U.S. to ease some sanctions before it would start dismantling its nuclear program, but the U.S. wanted it to denuclearize first.

The two leaders met again in February 2019, this time in Hanoi, Vietnam. But that summit ended abruptly without an agreement. Both sides blamed each other for the lack of a deal.

Then, in an effort to ease tensions, the U.S. announced an end to its annual large-scale military drills with South Korea.

Skip ahead to June 2019: President Trump became the first sitting U.S. president to step foot on North Korean soil when he traveled through the demilitarized zone and crossed the border from South Korea into the North.

But denuclearization talks remained mostly stalled. In September 2019, North Korea said it was willing to resume talks. Negotiations started up again in October but quickly fizzled out after North Korea said the U.S. "brought nothing" to the table.

North Korea then gave the U.S. until the end of the year to make concessions in denuclearization talks. After the U.S. dismissed that deadline, Kim signaled he may resume nuclear and long-range missile tests. In a speech, he said he no longer felt bound to his self-imposed suspensions on such tests and hadn't gotten anything in return for the suspension.

"He's representing his country. I'm representing my country. We have to do what we have to do. But he did sign a contract. He did sign an agreement talking about denuclearization. ... I think he's a man of his word. So we're going to find out," the president said.