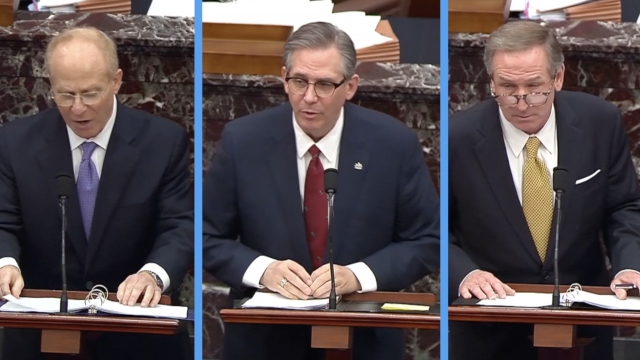 Former President Trump's lawyers made their defense immediately clear when they took the mic for day four of the Senate impeachment trial.

"The article of impeachment now before the Senate is an unjust and blatantly unconstitutional act of political vengeance," said Michael van der Veen, Trump's defense attorney.

Trump's defense team turned the tables to use Democrats' own words against them, arguing the former president's use of phrases like "fight like hell" was normal political speech.

"Under the standards of the House impeachment article, each of these individuals should be retroactively censored, expelled, punished or impeached for inciting violence by their supporters," said Van der Veen.

The lawyers argued Trump's words on Jan. 6 should absolutely be protected by the First Amendment, and they said he couldn't have incited an insurrection because no formal "insurrection" happened.

"Clearly there was no insurrection. Insurrection is a term of art defined in the law. It involves taking over a country, a shadow government, taking the TV stations over, and having some plan of what you're going to do when you finally take power. Clearly, this is not that," said Bruce Castor, a Trump defense attorney.

The defense team also directly attacked the House managers and their case, accusing them of withholding evidence, manipulating tweets and using hearsay that would never pass muster in a normal courtroom.

"As any trial lawyer will tell you, 'reportedly' is a euphemism for, 'I have no real evidence.' 'Reportedly' is not the standard in any American setting in which any semblance of due process is afforded an accused. 'Reportedly' isn't even, 'Here is some circumstantial evidence.' It is exactly as reliable as, 'I Googled this for you,'" said David Schoen, a Trump defense attorney.

Trump's defense team only used about two and a half of the 16 hours they were allotted. After they wrapped their case, the trial moved onto the next phase: questions from the senators.

"The House managers assert that the January 6 attack was predictable and it was foreseeable. If so, why did it appear that law enforcement at the Capitol were caught off guard and unable to prevent the breach?" Sen. Ron Johnson asked.

"Holy cow. That is a really good question. And had the House managers done their investigation maybe somebody would have an answer to that," said Van der Veen.

"Is the president innocent of inciting an insurrection because he says in a speech be peaceful?" asked Sen. Jeff Merkley.

"You rob the bank and on the way out the door you yell, 'Respect private property,' that's not a defense to robbing a bank," said Rep. Jamie Raskin, the lead House impeachment manager.

The trial will resume at 10 a.m. Eastern on Saturday, where any discussion for witness or other motions will take place. If there are none, then the trial will proceed to closing arguments.