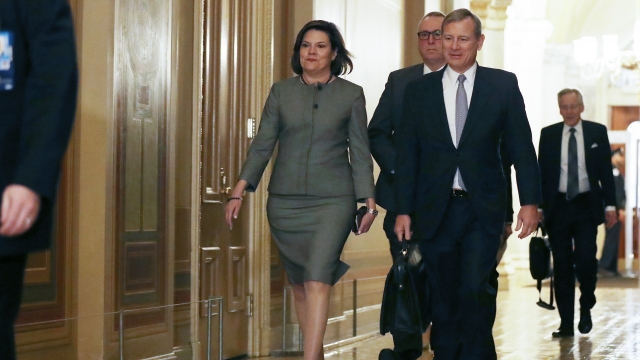 The president’s attorneys laid out the bulk of their defense Monday during the Senate's impeachment trial.

"They say they have proven each of the articles against President Trump. They have not," White House counsel Michael Purpura told senators.

President Trump's team told senators he was worried about corruption generally and never mentioned the security aid in that famous July phone call with Ukraine's leader.

They argued that Democrats have been hungry to impeach President Trump for years.

"In the House, resolution after resolution, month after month, have called for the president's impeachment," Trump attorney Ken Starr said.

This week senators will have to consider whether to call new witnesses and documents.

Over the weekend, The New York Times reported on explosive new claims in an upcoming book by former national security adviser John Bolton.

According to the Times, Bolton says President Trump told him he would keep military aid to Ukraine frozen in hopes of an investigation into the Bidens.

Bolton never testified in the House investigation but says he'd talk in the Senate.

Utah Sen. Mitt Romney is among two Republicans who may side with Democrats to call for witnesses.

Democrats need four Republicans to cross over to force the issue of witnesses.

"It's increasingly apparent that it's important to hear from John Bolton," Romney said.

GOP Sens. Lisa Murkowski and Rob Portman, both potential swing votes, told Newsy it's too soon to know whether calling witnesses is necessary, a move sure to anger the president.

"I can tell you nothing was ever said to John Bolton, but I have not seen a manuscript. I guess he's writing a book," President Trump said during a photo-op with Israel's prime minister.

But he offers a rare firsthand account of the president's actions on Ukraine.

"This is stunning," said Senate Minority Leader Chuck Schumer. "It goes right to the heart of the charges against the president. Ambassador Bolton essentially confirms the president committed the offenses charged in the first articles of impeachment."

Senators are likely to vote on whether to hear witnesses on Friday.