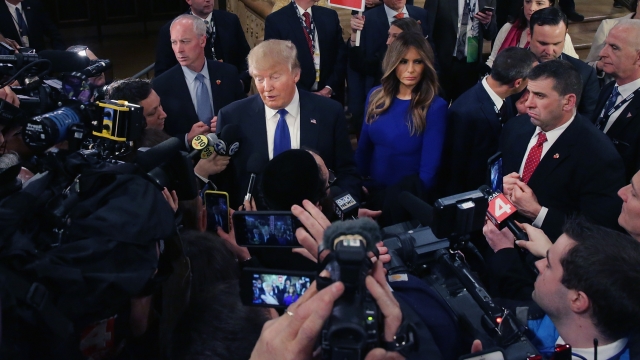 By Eugene Daniels
May 28, 2016
By covering conspiracy theories, the media ends up being complicit in their prevalence, but covering them is part of the job.
SHOW TRANSCRIPT

During a presidential election, the media's job is pretty clear: stay unbiased, keep the candidates honest and make sure the American people have all the information they need to cast a vote. But Donald Trump's habit of spouting conspiracy theories is making that job pretty complicated.

Throughout the primary season, the billionaire has brought up weird, outlandish and debunked theories that sound like they come from the strangest places on the internet. Don't forget that's sort of how he rose to political prominence in the first place.

The conspiracy theories work for Trump. They take over the news cycle, and almost every time, they force his opponent's campaign to spend time addressing the theory instead of focusing on trying to garner support and actually run for office.

And since the media can't just completely dismiss a candidate's statements without appearing biased, it forces journalists into an uncomfortable "damned if they do, damned if they don't" situation.

By covering the conspiracy theories, the media ends up being complicit in their prevalence, but ignoring them isn't an option either because covering them is literally part of the job.

Even if the media is able to debunk all of the theories quickly and accurately, there is so much distrust of the media, some will just see the media being biased against their candidate. But then there's also social media. More than half of both Facebook and Twitter users rely on their feeds to get news. But sprinkled in with established outlets are some unreliable sources, and continuing to fight these theories seems pretty futile.

Trump's promise of a shift to a more "presidential" persona seemingly has yet to materialize, so it's probably safe to say the press will have to cover a few more outlandish theories before this election is over.