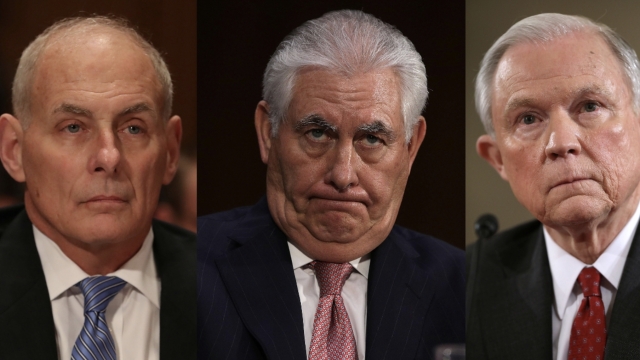 "We are spending too much money on NATO, and it turns out, very importantly, that it is obsolete," Trump said.

"Russia has reasserted itself aggressively, invading and occupying Ukraine," said Rep. Mike Pompeo, Trump's pick for CIA director. "And doing nothing to aid in the destruction and defeat of ISIS."

"He's going into Syria," Trump said of Putin. "He frankly wants to fight ISIS, and I think that's a wonderful thing."

"... a total and complete shutdown of Muslims entering the United States," Trump promised.

"I don't think it's ever appropriate to focus on something like religion as the only factor," Gen. John Kelly said in his confirmation hearing. He's Trump's pick to be secretary of the Homeland Security Department.

"I have no belief and do not support the idea that Muslims as a religious group should be denied admission to the U.S.," Sen. Jeff Sessions, Trump's attorney general pick, said in his hearing.

"They asked me, 'What do you think of waterboarding?' I said, 'I love it,'" Trump said at a rally.

"I don't think we should ever come close to crossing a line that is beyond what we as Americans would expect to follow in terms of interrogation techniques," Kelly said.

On the Trans-Pacific Partnership

"The TPP is a horrible deal ... and I would, yes, rather not have it," Trump said in a debate.

"I do not oppose TPP," Rex Tillerson, Trump's secretary of state pick, said in his confirmation hearing.

"The increase in the greenhouse gas concentrations in the atmosphere are having an effect," Tillerson said.

"It'll get cooler; it'll get warmer," Trump said. "It's weather. I think it's a big scam for a lot of people to make a lot of money."