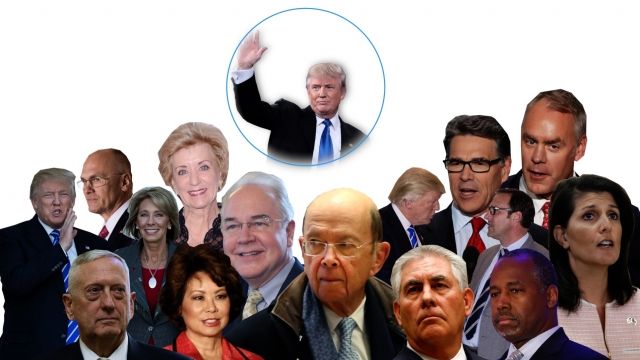 SMS
Trump's Cabinet Might Not Be Good For Climate Change

By Karen Rodriguez
December 20, 2016
The Environmental Protection Agency isn't the only department that deals with climate change.
SHOW TRANSCRIPT

President-elect Donald Trump is almost done making his Cabinet nominations. And scientists and environmentalists are worried those nominees could change the conversation on climate change.

When you hear "climate change," you probably don't think about the Department of Housing and Urban Development.

But under President Obama, the department started looking at smarter ways to build and grow sustainable housing. Trump's department nominee, Ben Carson, said during his failed presidential campaign he doesn't "subscribe to the politicization of the environment."

Other Cabinet nominees have ties to the fossil fuel industry.

Businessman Wilbur Ross has invested millions in the oil, gas and coal industries. He was tapped to head the Department of Commerce. It oversees the National Oceanic and Atmospheric Administration, which monitors the impact of climate change.

And the CEO of Exxon Mobil, Rex Tillerson, was nominated to head the State Department. As secretary of state, Tillerson would represent the U.S. at global climate negotiations, meetings and conferences.

He would also oversee the U.S. Agency for International Development, which spends about 40 percent of its budget on climate change initiatives.

Exxon Mobil has given millions of dollars to politicians who deny climate change. Tillerson has also said climate change is "overblown" and that we will "adapt" to its impact.

Since the election, Trump has said "nobody really knows" if climate change is real.

However, at least 97 percent of scientists say climate change is happening and it's likely due to human activity.