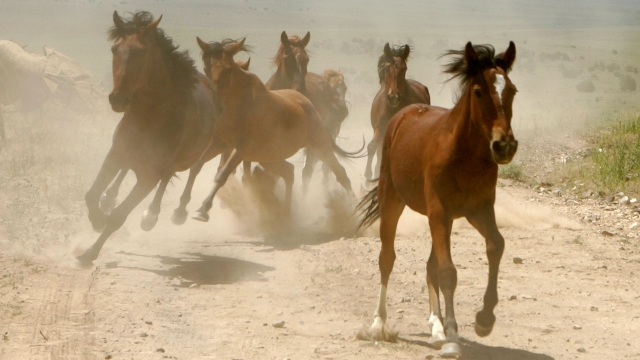 SMS
Trump's Proposed Budget Could Threaten An American Icon
By Katherine Biek
By Katherine Biek
May 30, 2017
The Bureau of Land Management currently cares for about 46,000 wild horses and burros in corrals and pastures.
SHOW TRANSCRIPT

When it comes to President Donald Trump's proposed budget, it seems wild horses and burros wouldn't get a very good deal.

Congress passed a law in 1971 that made it illegal to capture and kill the animals on federal land, calling them "living symbols of the historic and pioneer spirit of the West."

The U.S. Bureau of Land Management now cares for about 46,000 wild horses and burros in corrals and pastures. It estimates another 73,000 roam free on federally managed land.

However, the bureau notes that's almost three times as many wild horses and burros as the federally managed land can sustain.

That's a lot of horses and burros. And as their populations have increased, so has the bureau's budget for the management program. It's at just over $80 million this year.

Trump's budget for 2018 proposes cutting that by $10 million. That reduction would come from reducing relocations and birth control treatments and not putting limits on animal sales.

That would include letting the bureau knowingly sell horses and burros to slaughterhouses — something Congress has prohibited in its annual appropriations bills.

Horses haven't been slaughtered in the U.S. since 2007, but an estimated 137,000 American horses are sent to facilities in Mexico and Canada every year.

In a statement, the bureau says its current program is "unsustainable" but said its "first goal is always to find good homes for the thousands of wild horses and burros gathered from overpopulated herds on our country's public lands."

In 2009, then-Interior Secretary Ken Salazar suggested sterilizing the animals and spending $96 million to create two additional land preserves. The money was never made available for either proposal.