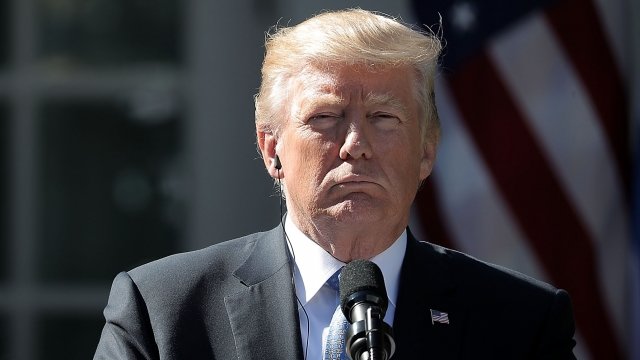 On Monday, President Donald Trump told reporters, "Something that people aren't talking about is how many judges we've had approved, whether it be the court of appeals, circuit judges, whether it be district judges."

And the president is right. There's a lot of focus on Trump getting Justice Neil Gorsuch on the Supreme Court. But he's going to be able to make an even bigger change to our judicial system: the lower federal courts.

The Constitution gives the president power to nominate not just Supreme Court justices but also judges on the court of appeals and district court judges. Each one of those judges has to be confirmed by the Senate, and each is a lifetime appointment.

Obama only had 54 federal judicial vacancies when he took office. Trump had more than 100 to fill when he walked in the door. To date, he's nominated 50, and seven have been confirmed.

Interestingly enough, many of these seats are open because, when Republicans retook the Senate in 2015, confirmation of Obama nominees essentially stopped.

And that has given President Trump a lot of power to remake the federal judicial system to his liking. And Republicans in the Senate are backing him 100 percent, even on his most controversial picks — one of whom says transgender children are evidence of "Satan's plan," and one who was stamped unqualified by the American Bar Association.

The Constitution doesn't lay out any formal qualifications or process for being nominated. When a seat opens, the president gets recommendations from all over, including Congress, other judges, the FBI and the Justice Department. But the final choice lies with the president.

Though the Supreme Court gets most of our attention, less than 200 cases make it there every year — which means much of our legal guidance comes from these lower courts. And issues like gun control, abortion rights and voter ID laws will be in the hands of a large number of judges chosen by Trump.