Trump: Russia Should Be Allowed Back In G7 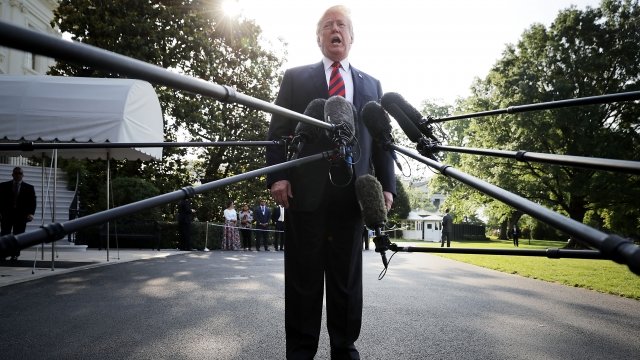 SMS
Trump: Russia Should Be Allowed Back In G7
By Ethan Weston
By Ethan Weston
June 8, 2018
The comments come at a time when tensions are high between President Trump and a number of other G7 members.
SHOW TRANSCRIPT

Before leaving for the G7 summit in Quebec, President Donald Trump said Russia should be let back into the international group.

"In the G7, which used to be the G8, they threw Russia out. They should let Russia come back in because we should have Russia at the negotiating table," he told reporters.

The G7 is made up of seven of the world's most powerful nations: Canada, France, Germany, Italy, the U.K., the U.S. and Japan. Together they cover topics such as economic growth, peace, security and social issues.

In 2014, Russia was kicked out of the group after it annexed Crimea.

Even before this comment, President Trump wasn't in the good graces of a number of G7 member states. Earlier this month, he imposed tariffs on steel and aluminum from Canada and the EU. He's also reportedly exploring new tariffs on Japanese auto exports.

One G7 member is siding with the president, though. Italy's new Prime Minister Giuseppe Conte said it would be in "everyone's interest" if Russia joined the talks.