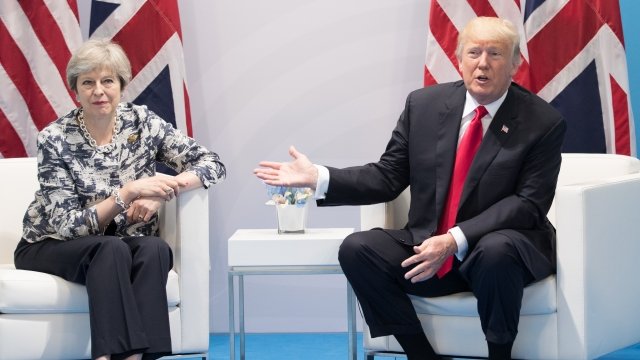 SMS
Trump Says Russia 'Must Provide Answers' On Chemical Attack In UK
By Jake Jones
By Jake Jones
March 13, 2018
The president told Prime Minister Theresa May the U.S. "stands in solidarity" with the U.K. following an attack on a former spy in England.
SHOW TRANSCRIPT

Trump agreed with May that Russia "must provide unambiguous answers regarding how this chemical weapon" was allegedly used against a former Russian spy-turned-double agent and his adult daughter.

The chemical used was a nerve agent developed by the Soviet Union, according to British authorities. May said it was "highly likely" the Russian government was behind the attack.

The U.K. gave Russia until midnight Tuesday to respond to those charges. But Russian officials have downplayed the accusations, attributing them to anti-Russian sentiment as the country prepares for Sunday's presidential election. Russia has denied any involvement in the attack.