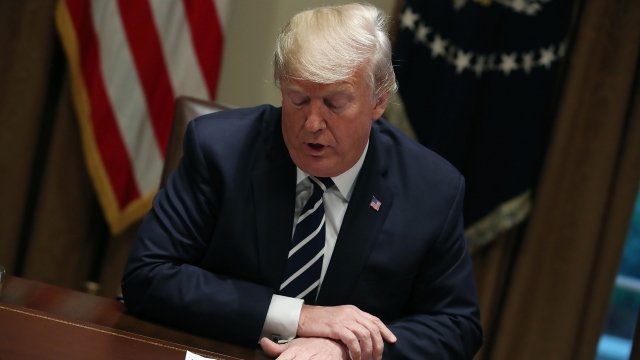 SMS
Trump Walks Back His Doubts About The US Intel On Russia's Meddling
By Matt Picht
By Matt Picht
July 17, 2018
President Trump is reaffirming that Russia meddled in U.S. elections after facing criticism from lawmakers, including his own party.
SHOW TRANSCRIPT

President Donald Trump is walking back his public doubts about U.S. intelligence findings that Russia meddled in the 2016 presidential election.

"I have full faith and support for America's great intelligence agencies. Always have," Trump said.

Trump said during his press conference in Helsinki: "They said they think it's Russia. I have President Putin, he just said it's not Russia. I will say this, I don't see any reason why it would be."

That claim, made next to Russian President Vladimir Putin, sparked almost immediate pushback from Trump's party.

Sen. Lindsey Graham said: "I think it was a bad day for the president. I think he can fix it — I think he needs to fix it." 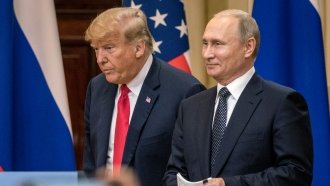 Rep. Adam Kinzinger said, "I think Trump, President Trump, was wrong yesterday in a major way, and I think it was a very embarrassing press conference."

There is near-unanimous consensus among U.S. intelligence agencies and on Capitol Hill that Russia attempted to sway the 2016 presidential election. U.S. agencies were raising red flags about Russian meddling as far back as October 2016 and linked those activities to Russian President Vladimir Putin's efforts to undermine U.S. democracy in a January 2017 report.

Those conclusions have been borne out in the months since by multiple investigations. Russia has been accused of buying propaganda ads on Facebook, hacking and disseminating the contents of private email accounts, pawing at state voting systems, and just about everything in between.

And special counsel Robert Mueller's investigation into the matter has led to the indictment of 26 Russian nationals and three Russian entities on a variety of charges.

But while almost everyone agrees that Russia tried to meddle in U.S. elections, the investigation into whether Trump’s campaign colluded with Russia is ongoing. That's where things get a bit more complicated.

Several members of Trump's campaign have been caught up in the investigation, but for largely unrelated charges. And while the investigation has exposed a number of shady characters — like recently-charged alleged Russian agent Maria Butina — there's no solid proof that the Trump campaign colluded with Russia.

Some of Trump's GOP allies are openly questioning whether the president is getting "meddling" and "colluding" mixed up.

New York Rep. Peter King said: "There is no evidence of collusion, but there is overwhelming evidence of meddling by the Russians. ... Those are two separate issues, and he's got to realize that."

Trump has complained that the collusion part of the probe as an attempt to tarnish the legitimacy of his presidency. But on Russian meddling at least, Trump says he's on board with his intelligence agencies.