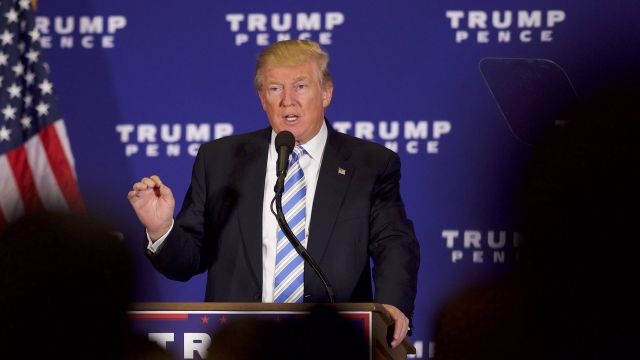 Donald Trump laid out his vision for the first 100 days in office of his potential presidency — and that list was pretty long.

"I'm not a politician and have never wanted to be a politician. ... But when I saw the trouble our country was in, I couldn't stand by any longer," Trump said Saturday.

During a speech in Gettysburg, Pennsylvania, the Republican nominee rattled off how he'd address corruption, immigration, tax reform and several other issues.

"A constitutional amendment to impose term limits on all members of Congress," he said.

He then addressed immigration, saying, "We will begin removing the more than 2 million criminal illegal immigrants from the country."

After that, he said, "We're going to suspend immigration from terror-prone regions where vetting cannot safely occur."

If any of that sounds familiar, it's because it probably is. Many of the policies Trump talked about Saturday are part of plans already outlined on his campaign website.

Trump has doubled down on his tax reform plan, saying he'd enact the Middle Class Tax Relief and Simplification Act, which he says is designed to help American workers and add at least 25 million jobs "through massive tax reduction."

He also touched on all of the things he's considering repealing if elected, including Common Core education, the Affordable Care Act and the Trans-Pacific Partnership.

Trump is the first major presidential candidate this election to explicitly map out his first 100 days. Hillary Clinton laid out a less comprehensive 100-day plan earlier this year.