#TaxDay Demonstrations In Several Cities Get A Presidential Response 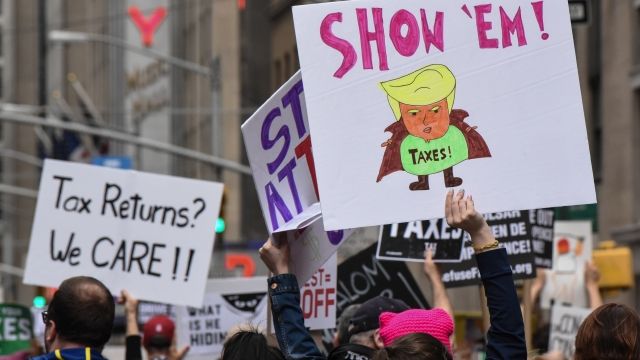 SMS
#TaxDay Demonstrations In Several Cities Get A Presidential Response
By Jake Jones
By Jake Jones
April 16, 2017
Demonstrators took to the streets in several cities calling for the president to release his tax returns.
SHOW TRANSCRIPT

Across the country, demonstrators took to the streets Saturday to demand that President Donald Trump release his tax returns.

The Tax Day protests were largely peaceful, with the exception of Berkeley, California.

Pro-Trump and anti-Trump protesters clashed in a series of fistfights and brawls. Police say they arrested 20 people.

Trump has repeatedly said that only the media cares about his taxes.

But after Saturday's marches, the president responded on Twitter. He claimed the protesters were paid but did not provide any proof.

To date, Trump hasn't publicly released any of his tax returns, even though he said in 2014 that he would.

"If I decide to run for office, I'll produce my tax returns, absolutely," Trump told Irish TV in 2014.

In March, investigative journalist David Cay Johnston received a copy of Trump's 2005 tax return summary. Based on the way he got his hands on it, Johnston speculated Trump himself may have leaked the pages as a distraction.

"What can you tell us about how you got these pages? How you got this document?" MSNBC host Rachel Maddow asked.

"Came in the mail over the transom," Johnston replied, meaning he had not done anything to solicit the documents.

Trump is the first president since Jimmy Carter to refuse to release his tax information. Experts believe those records would uncover any of Trump's financial conflicts of interest, including possible business ties to Russia.