Trump Is Reportedly Using His Personal Cellphone More And More 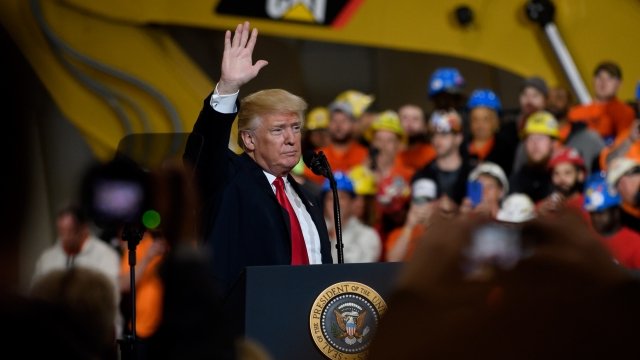 SMS
Trump Is Reportedly Using His Personal Cellphone More And More
By Katherine Biek
By Katherine Biek
April 24, 2018
CNN reports the president has been using his personal cellphone to communicate with outside advisers and Republican lawmakers.
SHOW TRANSCRIPT

President Donald Trump has reportedly been using his personal cellphone more to communicate with outside advisers and Republican lawmakers.

CNN was the first to report on the private calls, noting a number of sources both inside and outside the White House see it as a sign that Trump is sidelining his chief of staff John Kelly.

If Trump makes a call using the White House switchboard, then Kelly receives a printed notice of who he was talking to. But that's not the case with a personal cell phone.

One source told CNN, "Kelly used to be more clearly the gatekeeper than he is now from a Hill standpoint."

Prior to Kelly starting his chief of staff job last year, Trump reportedly asked multiple world leaders to call him on his cellphone instead of on a more secure line.

In any of these reported instances, it's unknown if Trump used his government-issued cellphone or the "old, unsecured Android" he had before taking office. But experts say both pose a security risk as hackers could gain access to private information or eavesdrop on calls.