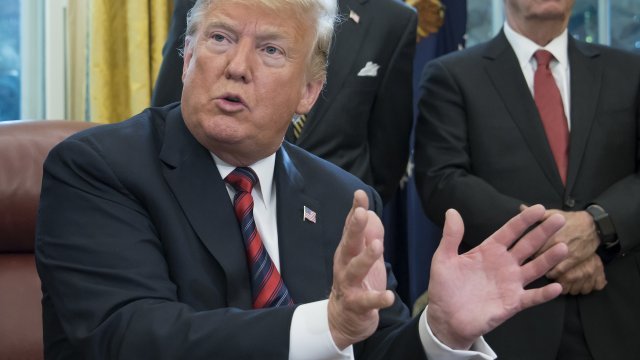 According to Axios, Trump believes the island, which is still trying to rebuild after Hurricane Maria, is using hurricane relief money to pay off its debt. But he doesn't have evidence to back up that claim.

Congress already set aside billions in federal disaster relief. At the same time, Puerto Rico is struggling to recover from its debt crisis that started long before the storm hit.

This appears to be connected to a Wall Street Journal story. Back in October, the paper ran a story on the value of Puerto Rican bonds. Bonds are largely how the island borrowed money during its financial crisis. The Journal story linked the island's increased bond prices, in part, to its improved economic outlook.

But Axios reports Trump misunderstood that story, and it led him to think the island's government is using disaster relief money to pay off its debt.

In reality, Bloomberg reports that Puerto Rico's leaders don't plan to use federal aid money to pay off lenders.

Congress hasn't handed out all the money it set aside for Puerto Rico, and Trump can't do anything about blocking those funds. But the president could refuse to sign any future spending bill that would send additional aid to Puerto Rico.