Trump Announces 25 Percent Tariff On $50B Worth Of Chinese Goods 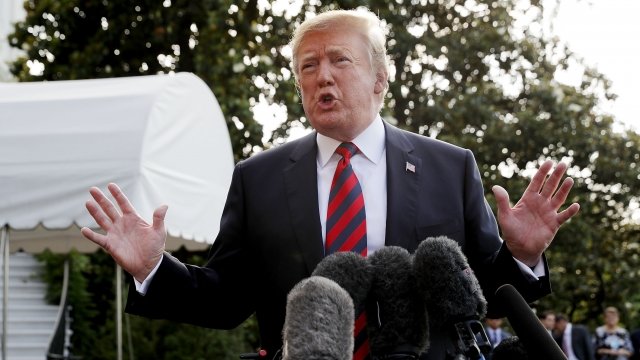 SMS
Trump Announces 25 Percent Tariff On $50B Worth Of Chinese Goods
By Katherine Biek
By Katherine Biek
June 15, 2018
President Donald Trump said Friday that the tariffs will be imposed on goods "that contain industrially significant technologies."
SHOW TRANSCRIPT

The Trump administration announced Friday it will implement a 25 percent tariff on $50 billion worth of Chinese goods.

In a statement, President Donald Trump said the tariffs will be imposed on goods "that contain industrially significant technologies."

The U.S. and China have been going back and forth about tariffs for months. The two countries have threatened to hit each other with tens of billions of dollars worth of tariffs.

In April, the Trump administration released an initial list of roughly 1,300 Chinese products that could face tariffs. On Friday, the Office of the United States Trade Representative said the U.S. will initially impose tariffs on more than 800 of those items next month.

It said tariffs affecting another 284 products worth $16 billion could be implemented after undergoing a review and public comment process.

China's commerce ministry responded to the tariff announcement, saying, "We will immediately introduce taxation measures of the same scale and the same strength."

Trump said Friday that the U.S. will pursue more tariffs if China retaliates. The first set of tariffs on Chinese imports will go into effect July 6.