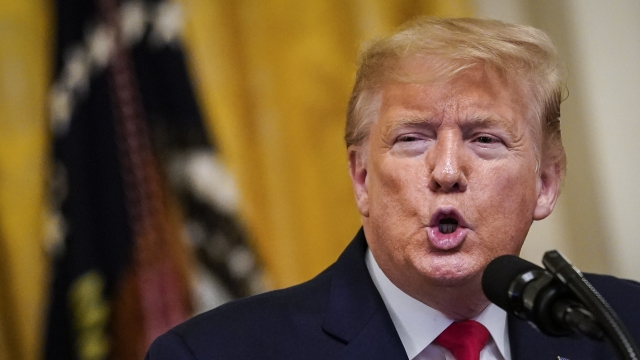 SMS
President Trump Refuses To Lift Sanctions To Negotiate with Iran
By Ahmed Jawadi
By Ahmed Jawadi
January 26, 2020
Iran's foreign minister said he would "never rule out" the possibility of negotiations, but the U.S. would first need to lift the sanctions.
SHOW TRANSCRIPT

President Donald Trump said the U.S. will not lift its sanctions on Iran in order to open negotiations with the country.

In an interview with Der Spiegel magazine on Friday, Iranian Foreign Minister Mohammad Javad Zarif said he would "never rule out" the possibility of negotiations between Tehran and Washington. He added: "For us, it doesn't matter who is sitting in the White House. What matters is how they behave. The Trump administration can correct its past, lift the sanctions and come back to the negotiating table. We're still at the negotiating table."

Earlier this month, Treasury Secretary Steven Mnuchin announced the Trump administration would be slapping new sanctions on Iran in the wake of attacks on U.S. and allied troops in Iraq. Secretary of State Mike Pompeo said the goal of the administration's campaign "is to deny the [Iranian] regime the resources to conduct its destructive foreign policy."

Zarif replied to President Trump's tweet with a tweet of his own on Sunday, saying "[President Trump] is better advised to base his foreign policy comments & decisions on facts, rather than [Fox News] headlines or his Farsi translators."