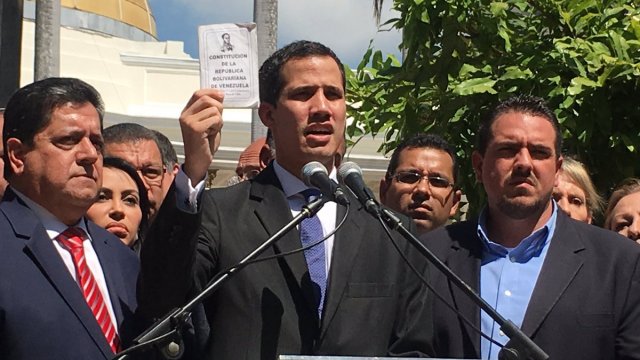 Guaido swore himself in as president Wednesday in Venezuela's capital.

It happened as tens of thousands of Venezuelans took to the streets to protest the re-election of President Nicolás Maduro. Many Venezuelan opposition leaders and some foreign governments have claimed he won by rigging the election.

President Trump said in a statement that the country's National Assembly invoked the Venezuelan constitution, which gives Guaido the power to overthrow Maduro. He said, "The people of Venezuela have courageously spoken out against Maduro and his regime and demanded freedom and the rule of law."

Senior Trump administration officials told reporters Wednesday that if Maduro chooses to respond with violence, "all options are on the table" for the U.S. They said that could mean economic sanctions but did not elaborate.